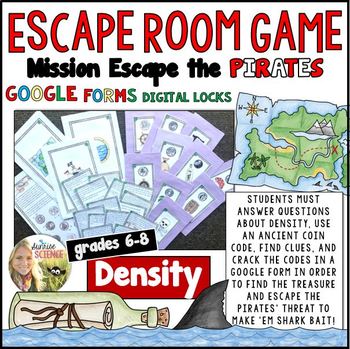 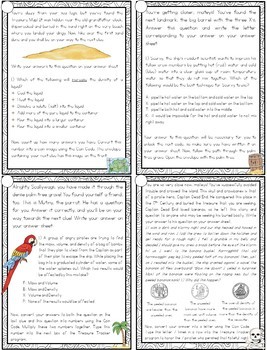 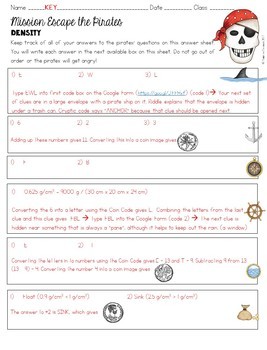 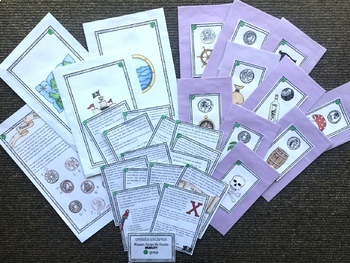 This Density of Matter Escape Room Review Game product is included in the Density Activities Bundle!

This Density of Matter Escape Room Review Game activity involves teamwork and attention to detail as your students prove their understanding of the property of density of matter while they imagine that they have found themselves captured by pirates and stuck on the ship! The Captain tells the prisoners that he will give them a chance to find the treasure on the nearby island by following the series of clues. If they can find the treasure, he won’t make them shark bait. The questions on the clues are about density, including concepts of mass, volume, water displacement and density, the formula to find density, using the formula to solve problems, the concepts of sinking and floating, relative density, and ways to change the density of a liquid.

The students will answer questions and follow directions/riddles to locate envelopes in the classroom with more clues. They will also be instructed along the way to input codes (in the form of letters and numbers) into the “Treasure Tracker” program, which is a Google Form that they will access online. As they input the consecutive codes into the Google Form, they will be brought closer and closer to the final clue, which will tell them where to find the treasure.

Teacher must provide envelopes (3 - 6" x 9" and 10 - 4.75" x 6.75" per student group of 4 - 6 students). All other materials are included, including detailed teacher directions for set-up and facilitation and an answer key to the student answer sheet.

Please note that you should not buy this with plans to use it tomorrow! You will need to allot around 45 minutes to set up this game for 5 groups. Once you get the hang of the way the game is set up for one group, the prep work goes quicker!

Total Pages
16 pages
Answer Key
Included
Teaching Duration
45 minutes
Report this Resource to TpT
Reported resources will be reviewed by our team. Report this resource to let us know if this resource violates TpT’s content guidelines.