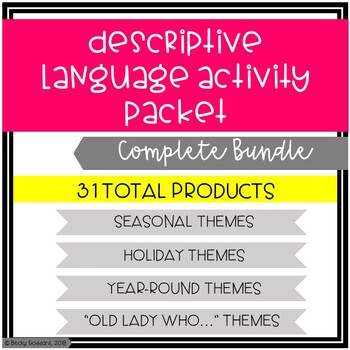 Products in this Bundle (31)

Each packet contains various activities for addressing descriptive language skills. These activities can be completed on their own or with programs like the Expanding Expressions Tool (EET) by Sara L. Smith. The seasonal themes make them an excellent resource for theme-based therapy, and a fun way to engage students.

This bundle includes packets for these themes:

Back To School Edition

DESCRIPTIVE CHOICE CARDS: These cards provide answers for each of the provided descriptive language worksheets. These can be used with your younger student or lower functioning students to give them choices for each possible answer.

HOLDING MAT: The holding mat can be printed multiple times for each individual student. Use the picture cards and descriptive choice cards to fill in the holding mat.

COLOR AND DESCRIBE WORKSHEETS: Students color themed pictures however they wish and describe the picture using the descriptive language prompts. Once complete, they write a paragraph describing their specific prompts.

VENN DIAGRAM: This can be used with any of the picture cards and descriptive language cards for comparing and contrasting items.