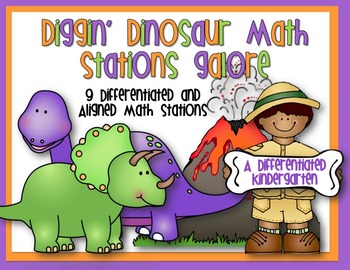 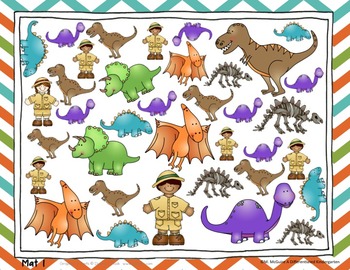 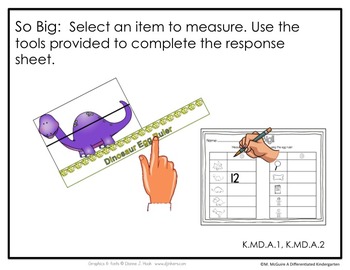 Station 1: Count, Graph, Tally, Making 10 and Adding Dinos Fun-Five Different Activities in One Station
Station 2: Dinosaur Roar –Base Ten Place Value Fun
Station 3: Last Dinosaur Standing: Spin and Win Differentiated for Addition, Subtraction, Mixed Operations 0-5 and Addition, Subtraction and Mixed Operation 5-10
Station 4: Dino Sort Addition and Subtraction (recording sheets included)
Station 5: Dinosaur Swat Fluency Fun for Addition and Subtraction
Station 6: Baby Dino Hunt: A 3D shapes game
Station 7: So Big: Dinosaur Measuring Fun
Station 8: Decomposing Dinos –Self-Correcting Station
Station 9: Counting on Dinosaurs-Number line addition and subtraction
These stations are not only differentiated but also aligned to the following Common Core Standards:
K.CC.A.3 Write numbers from 0 to 20. Represent a number of objects with a written numeral 0-20 (with 0 representing a count of no objects).
K.CC.B.4 Understand the relationship between numbers and quantities; connect counting to cardinality.
K.CC.B.5: Count to answer “how many?” questions about as many as 20 things arranged in a line, a rectangular array, or a circle.
K.CC.C.6: Identify whether the number of objects in one group is greater than, less than, or equal to the number of objects in another group, e.g., by using matching and counting strategies.
K.CC.C.7: Can compare two written numerals between 1-10.
K.OA.A.2: Solve addition and subtraction word problems, and add and subtract within 10, e.g., by using objects or drawings to represent the problem.
K.OA.A.3:  Decompose numbers less than or equal to 10 into pairs in more than one way, e.g., by using objects or drawings, and record each decomposition by a drawing or equation (e.g., 5 = 2 + 3 and 5 = 4 + 1).
K.OA.A.4:  For any number from 1 to 9, find the number that makes 10 when added to the given number, e.g., by using objects or drawings, and record the answer with a drawing or equation.
K.OA.A.5: Fluently add and subtract to five.
K.NBT.A.1: Compose and decompose numbers from 11 to 19 into ten ones and some further ones, e.g., by using objects or drawings, and record each composition or decomposition by a drawing or equation (such as 18 = 10 + 8); understand that these numbers are composed of ten ones and one, two, three, four, five, six, seven, eight, or nine ones.
K.MD.B.3: Classify objects into given categories; count the numbers of objects in each category and sort the categories by count.
K.GA.2: Correctly name shapes regardless of their orientations or overall size.
K.MD.A.1:  Describe measurable attributes of objects, such as length or weight. Describe several measurable attributes of a single object.

So much to see that you have to check out the preview pages just to get an idea of all that is included. If you're looking for other Dinosaur themed, differentiated activities, please check out my store and other products.

If you have any questions or concerns regarding this item or any of my other items, please feel free to contact me at mmmoffitm@gmail.com