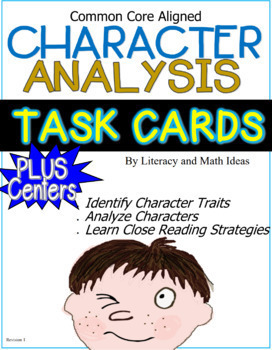 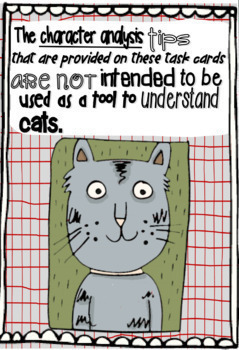 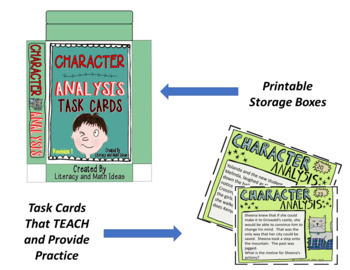 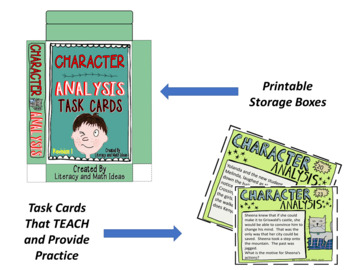 Helpful hints are included on some of the cards to help students learn and review character traits and character analysis. Once students complete a digital worksheet, student work is scored and saved to your Google Drive automatically. A detailed report is also produced so that you can see what questions students answered correctly or need extra practice on which is also saved to your drive.

----Printable Boxes For Storage Are Included----

Part of the Common Core Standards assessments and state assessments contain multiple-choice questions. Other sections often require students to write their answers and defend their ideas. This document provides practice in both formats in the task cards!

Cause and Effect: Locating Text Evidence

Log in
to see state-specific standards (only available in the US).
CCSSRL.6.3
Describe how a particular story’s or drama’s plot unfolds in a series of episodes as well as how the characters respond or change as the plot moves toward a resolution.
CCSSRL.5.2
Determine a theme of a story, drama, or poem from details in the text, including how characters in a story or drama respond to challenges or how the speaker in a poem reflects upon a topic; summarize the text.
CCSSRL.4.3
Describe in depth a character, setting, or event in a story or drama, drawing on specific details in the text (e.g., a character’s thoughts, words, or actions).
Total Pages
39 +
Answer Key
Included
Teaching Duration
N/A
Report this Resource to TpT
Reported resources will be reviewed by our team. Report this resource to let us know if this resource violates TpT’s content guidelines.