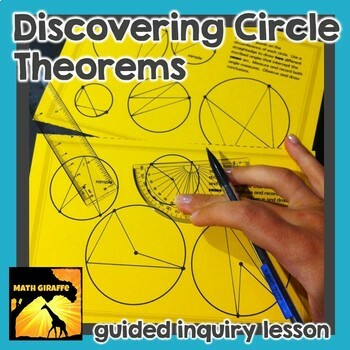 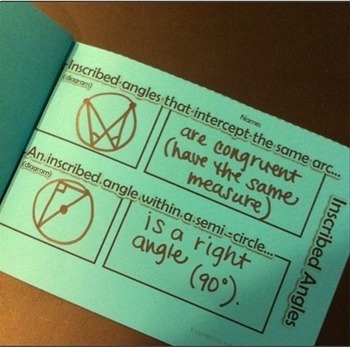 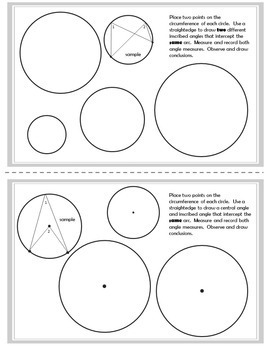 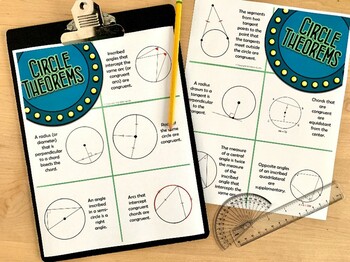 - Reference sheet with 10 theorems in color and in black & white (2 pages to be printed as a double-sided 8.5x11 poster)

The following theorems are included:

- Inscribed angles that intercept the same arc (or congruent arcs) are congruent.

- Radii of the same circle are congruent.

- A radius (or diameter) that is perpendicular to a chord bisects the chord.

- An angle inscribed in a semi-circle is a right angle.

- The segments from 2 tangent points to the point that the tangents meet outside the circle are congruent.

- A radius drawn to a tangent is perpendicular to the tangent.

- Chords that are congruent are equidistant from the center.

- Opposite angles in an inscribed quadrilateral are supplementary.

** This resource is also available as part of a DISCOUNTED bundle: Circles Bundle

Total Pages
9 plus answer keys & directions
Answer Key
Included
Teaching Duration
2 days
Report this Resource to TpT
Reported resources will be reviewed by our team. Report this resource to let us know if this resource violates TpT’s content guidelines.

Log in
to see state-specific standards (only available in the US).
CCSSHSG-C.A.2
Identify and describe relationships among inscribed angles, radii, and chords.
CCSSHSG-C.A.3
Construct the inscribed and circumscribed circles of a triangle, and prove properties of angles for a quadrilateral inscribed in a circle.
CCSSHSG-C.A.4
Construct a tangent line from a point outside a given circle to the circle.