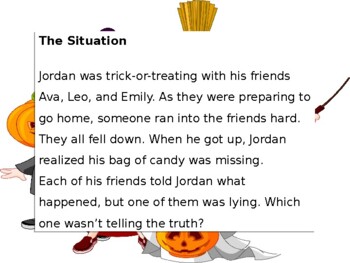 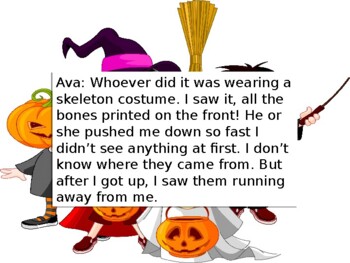 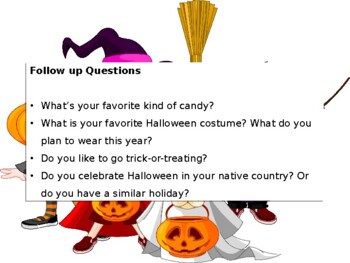 One of my best-selling Clue by Clue Activities, with a Halloween twist.

In this fun mystery activity, students investigate who stole a bag of candy from a trick or treater. There are three witness, but one of them is lying. Can your students read and analyze their statements and figure out who the liar is?

This is the PowerPoint version. There is also a Printable PDF Version and a Google Slides version.

What is a Clue by Clue Mystery?

It's a great warm-up, critical thinking game, conversation starter, filler, or a time killer for early finishers. Students are given a mystery to solve--whodunit or how did they do it or why. They have to figure it out by reading a series of clues, one at a time. As they receive each clue, they speculate on its significance and what it tells them about the situation.

Once they have received all the clues, they should have enough information to figure it out!

Why Use Clue by Clues?

Clue by Clues encourage critical thinking and discussion. They are also close reading activities that teach students to look for details, synthesize information from different sources, apply prior knowledge about the world, and to recognize the logic of a claim and evaluate its validity.

While students are solving the mysteries they are also developing their spoken language skills, using language such as:

* Modal verbs of speculation: She must have forgotten her keys, It could have been the butler

* Conclusions: That means that...

* Hypotheticals: What if he didn’t do it, If he was at the movies, he couldn’t have done it.

They are also a lot of fun!

The Movie of Death: Analyze and then write a scary Halloween story

Halloween True or False Test what students know about Halloween

This is Halloween Lyrics Gap-Fill

Light as a Feather, Stiff as a Board A logic puzzle where students figure out which costume everyone wore and wear they sat, so they can find the killer.

For Powerpoint or Google Slides!

The Weird Break-In PowerPoint Who broke into a store without stealing anything? And why?

The Perfect Crime PowerPoint A woman kills her husband without getting caught. How?

An Unrelated Murder PowerPoint Police can find no connection between the killer and the victim.

Imprisoned Power Point A woman ends up in prison without being arrested. Based on a true story. What happened?

Murder of a Millionaire PowerPoint The longest Clue by Clue. An elaborate Agatha Christie-style mystery with many suspects and many secrets. Whodunit?

Elevator Routine PowerPoint A classic riddle about a woman who always gets off the elevator two stories below her apartment. Why?

Secret Santa Logic Puzzle: Read the clues and figure out who gave whom what in a secret Santa exchange.

Missing Mashed Potatoes: The distance learning version of this fun Thanksgiving-themed mystery. Who ate the mashed potatoes before dinner even started?

Murder of a Millionaire: This online version will make students think they are in an Agatha Christie story. Who killed the millionaire business man found in a locked room?

Beaten to Death: A woman is found beaten to death and the police know the husband did it. How can they be sure?

The Letter Thief: Why does a man kill one woman and steal a letter from another woman?

The Candy Thief A Halloween-themed mystery for younger learners.

Light as a Feather, Stiff as a Board A Logic Puzzle to figure out who turned a Halloween party into a murder.

The Weird Break In Who broke into a store without stealing anything? And why?

The Perfect Crime A woman kills her husband without getting caught. How?

An Unrelated Murder Police can find no connection between the killer and the victim.

Imprisoned! A woman ends up in prison without being arrested. Based on a true story. What happened?

Murder of a Millionaire A woman ends up in prison without being arrested. Based on a true story. What happened?

The Elevator Routine Riddle A classic riddle about a woman who always gets off the elevator two stories below her apartment. Why?

The Anonymous Answers Unfinished Mystery: A creative writing prompt where students decide who did it! Someone stole the answers to the test. Was it a hacker, a bully, a disgruntled teacher, or someone else? Your students decide!

The Crazy Crime Scene Unfinished Mystery: A creative writing prompt where students write the ending! A bank has been robbed and there are too many clues. Which ones matter? Who did it, how, and why? Your students decide!

Read, Analyze, then Write a Short Mystery: Everything you need to help students analyze the structure and key elements of a mystery story, then create their own!

Video Tutorial: Using Mysteries in Class See Clue by Clues and other mystery activities in action.