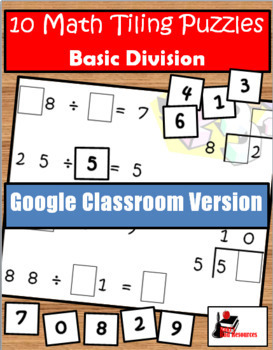 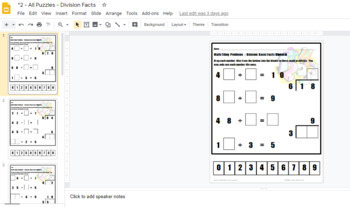 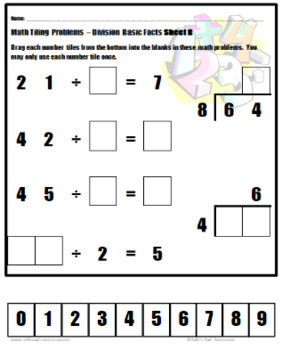 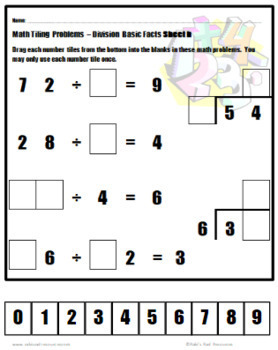 Raki's Rad Resources
7.2k Followers
Follow
Made for Google Drive™
This resource can be used by students on Google Drive or Google Classroom. To access this resource, you’ll need to allow TpT to add it to your Google Drive. See our FAQ and Privacy Policy for more information.
DescriptionStandards5ReviewsQ&A

Are you looking for a creative new way to have your students practice division? Try Tiling! In Tiling activities, students will use the provided "digit tiles" to place the numbers 0 - 9 to fill in the holes left in provided division equations. While trying to figure out where the missing numbers go, students will work on basic facts, properties of division and problem solving skills. These puzzles make a wonderful math center, problem solving station, critical thinking homework assignment or extension activity.

This packet includes 10 different Tiling Worksheets, each with it's own answer key. This packet provides tiling problems for basic division facts.

Log in
to see state-specific standards (only available in the US).
CCSS3.OA.A.2
Interpret whole-number quotients of whole numbers, e.g., interpret 56 ÷ 8 as the number of objects in each share when 56 objects are partitioned equally into 8 shares, or as a number of shares when 56 objects are partitioned into equal shares of 8 objects each. For example, describe a context in which a number of shares or a number of groups can be expressed as 56 ÷ 8.
CCSS3.OA.A.4
Determine the unknown whole number in a multiplication or division equation relating three whole numbers. For example, determine the unknown number that makes the equation true in each of the equations 8 × ? = 48, 5 = __ ÷ 3, 6 × 6 = ?.
CCSS3.OA.B.6
Understand division as an unknown-factor problem. For example, find 32 ÷ 8 by finding the number that makes 32 when multiplied by 8.
CCSS3.OA.C.7
Fluently multiply and divide within 100, using strategies such as the relationship between multiplication and division (e.g., knowing that 8 × 5 = 40, one knows 40 ÷ 5 = 8) or properties of operations. By the end of Grade 3, know from memory all products of two one-digit numbers.
CCSS4.NBT.B.6
Find whole-number quotients and remainders with up to four-digit dividends and one-digit divisors, using strategies based on place value, the properties of operations, and/or the relationship between multiplication and division. Illustrate and explain the calculation by using equations, rectangular arrays, and/or area models.