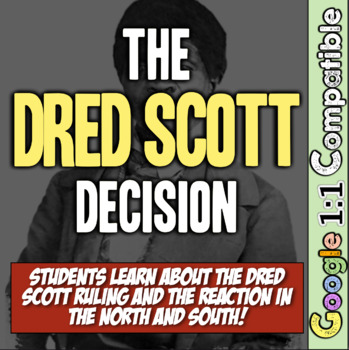 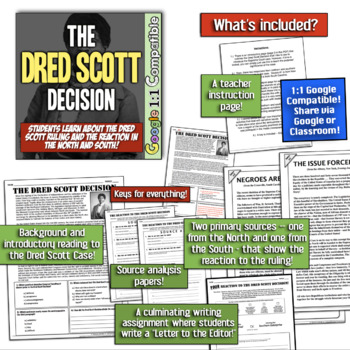 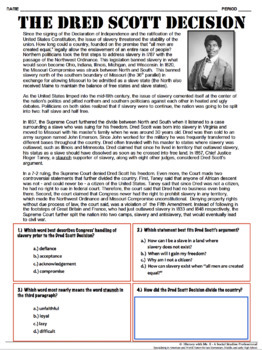 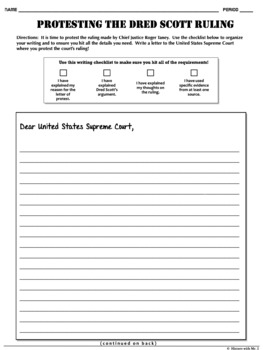 This resource on the Dred Scott Decision is also included in the much larger Sectionalism and Irreconcilable Period Bundle, located here:

In this highly-engaging and Common Core focused lesson, students learn about the crucial Supreme Court case known as the Dred Scott decision, the reaction throughout the North and South, and how it further set the nation down the path of Civil War.

First, students complete an introductory reading activity on the Dred Scott decision which can serve as an all-inclusive resource if time is limited. Then, students analyze two newspaper primary sources that show the public reaction to the Supreme Court's ruling. One from the North and one from the South, students analyze these two sources to see how the ruling was felt throughout the nation and how it further divided the United States and led to Civil War.

To conclude, students write a "Letter to the Editor" as a culminating writing assignment where they either agree or disagree to a certain newspaper!

Very eye-opening lesson that creates multiple chances for meaningful conversations with your students!

Be sure to check out my other resources concerning sectionalism and the march toward Civil War:

Nat Turner's Rebellion! A Student Webquest: Should Turner Be Remembered?

Total Pages
11 pages
Answer Key
Included
Teaching Duration
3 days
Report this Resource to TpT
Reported resources will be reviewed by our team. Report this resource to let us know if this resource violates TpT’s content guidelines.

Log in
to see state-specific standards (only available in the US).
CCSSRH.6-8.10
By the end of grade 8, read and comprehend history/social studies texts in the grades 6–8 text complexity band independently and proficiently.
CCSSRH.6-8.8
Distinguish among fact, opinion, and reasoned judgment in a text.
CCSSRH.6-8.6
Identify aspects of a text that reveal an author’s point of view or purpose (e.g., loaded language, inclusion or avoidance of particular facts).
CCSSRH.6-8.5
Describe how a text presents information (e.g., sequentially, comparatively, causally).
CCSSRH.6-8.4
Determine the meaning of words and phrases as they are used in a text, including vocabulary specific to domains related to history/social studies.