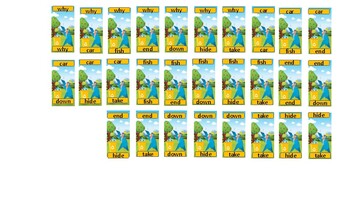 The Shuffle: To begin the dominoes are placed face down and “shuffled.” Players throw a dice. The player with the highest number plays first.

Drawing: Each player then draws seven dominoes for his hand.

Objective of the game: To match up rhyming/matching words on opposite sides of the line.

Blocking the Game: If in the course of the game it is impossible for any of the players to play, the game is “Blocked.” The player having the least number of dominoes is the winner. Shuffle and begin a new game. The player who won plays first.