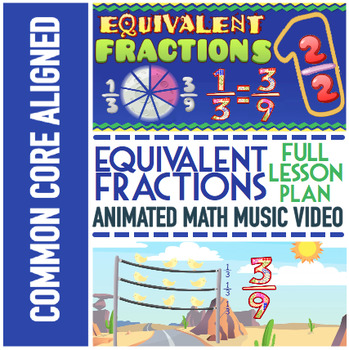 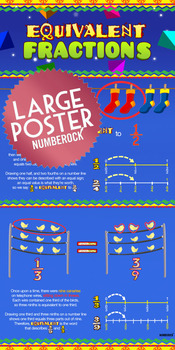 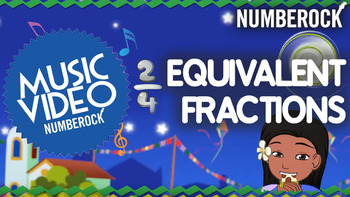 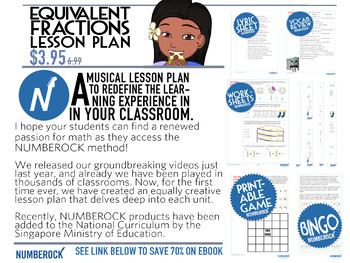 "Equivalent fractions is the name…
of fractions whole values are the same!"
... are just some of the lyrics that make this song so special. The animtaed music video also comes with a host of engaging activities which are explained in detail below.

With the added touch of a Latin video in the musical track, equivalent fractions will be easy to understand.

You're Going To Get So Much More Than Just A Video. See below for details.

Video Comes With Tons Of Extra Creative Teaching Resources Such As:

• Lyric sheet for singing along
Your students can sing along as the music video plays.

• Fill in the blanks/cloze (lyrics w/ some missing words)
After they watch the video, they master the math vocabulary by filling in the missing words.

• Printable Game
When activities are complete, check for concept mastery while having a bit of fun.

• HW sheet
Video-Aligned homework that maintains the style and format of the animated video.

• Short quiz/exit slip to check for understanding
When activity is complete, check for concept mastery with short quiz.

• CD Quality Song File
Get the song on a CD file and play the song during break or lunch.

• Clear Lesson Plan Sheet Illuminating Classroom Best Practice:
Get my personal recommendations for how to introduce the material and set-up the lesson as I do in class.


Thanks you for checking us out, you may also like...
Our Complete Digital Library at 65% Off

About Me
I’m Mr. Hehn, and I’ve developed some excellent materials for my classroom throughout my 7 years as an elementary public school teacher that I’d love to share with you. I like to incorporate dancing, singing, and listening to music into my lessons. My project, NUMBEROCK, is a collection of music videos that teach/reinforce mathematical concepts that include posters and lesson plans to make learning math fun in a whole new way.

Once upon a time, there were nine canaries
On telephone wires, sittin’ down in threes.

Each wire contained one third of the birds,
So three ninths is equivalent to one third.

Therefore, equivalent is the word
That describes 3/9 and 1/3.

Equivalent fractions is the name
For fractions whose values are the same.

If there were four socks to wear,
Then we would say there’d be two in each pair;

And one of the two pairs, we can declare,
Equals two fourths of all the socks there.

Drawing one half and two fourths on a number line
Shows they can be described with an equal sign;

An equal value is what they’re worth,
So we say one half is equivalent to two fourths.

Equivalent fractions is the name
For fractions whose values are the same.

If the numerator and denominator share a common factor,
Then you can divide the top and bottom by the same number.

On top and under, and say with satisfaction,
“We found an equivalent fraction.”

And you can multiply the top and the bottom
By the same number on top and under,

Which is really a fraction whose value equals one,
And through this action we found an equivalent fraction!

TEKS READINESS & Supporting Standards
Readiness Standard 3.3F
... represent equivalent fractions with denominators of 2, 3, 4, 6, and 8 using a variety of objects and pictorial models, including number lines.
SUPPORTING Standard 3.3G
...explain that two fractions are equivalent if and only if they are both represented by the same point on the number line or represent the same portion of a same size whole for an area model.
SUPPORTING Standard 4.3C
...determine if two given fractions are equivalent using a variety of methods.

Common Core Standard ( CCSS )
3.NF.A.3
Explain equivalence of fractions in special cases, and compare fractions by reasoning about their size.
A. Understand two fractions as equivalent (equal) if they are the same size, or the same point on a number line.
B. Recognize and generate simple equivalent fractions, e.g., 1/2 = 2/4, 4/6 = 2/3. Explain why the fractions are equivalent, e.g., by using a visual fraction model.
C. Express whole numbers as fractions, and recognize fractions that are equivalent to whole numbers. Examples: Express 3 in the form 3 = 3/1; recognize that 6/1 = 6; locate 4/4 and 1 at the same point of a number line diagram.
4.NF.A.1
Explain why a fraction a/b is equivalent to a fraction (n × a)/(n × b) by using visual fraction models, with attention to how the number and size of the parts differ even though the two fractions themselves are the same size. Use this principle to recognize and generate equivalent fractions.
4.NF.A.2
Compare two fractions with different numerators and different denominators (e.g., by creating common denominators or numerators, or by comparing to a benchmark fraction such as 1/2). Recognize that comparisons are valid only when the two fractions refer to the same whole. Record the results of comparisons with symbols >, =, or <, and justify the conclusions (e.g., by using a visual fraction model).

Total Pages
11 pages
Answer Key
Included
Teaching Duration
50 minutes
Report this Resource to TpT
Reported resources will be reviewed by our team. Report this resource to let us know if this resource violates TpT’s content guidelines.