ESPN's 30 for 30 Films-Brothers in Exile: A Viewing Guide 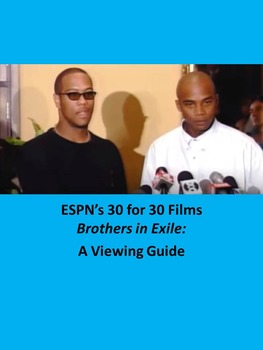 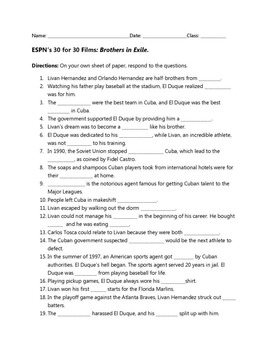 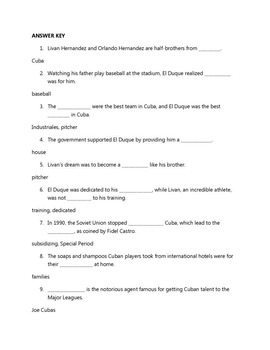 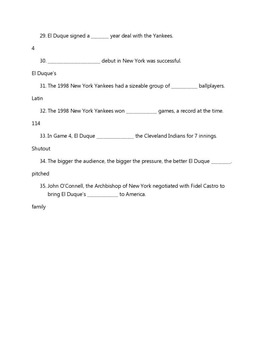 791 Followers
Follow
More products from Barraug Books and Curriculum
$4.00
Digital Download
Report this resource to TpT
Also included in:
Product Description
From the ESPN Website: Major League Baseball has been transformed by the influx of Cuban players such as Aroldis Chapman, Yasiel Puig and Jose Abreu. But a special debt of gratitude is owed to two half-brothers, whose courage two decades ago paved the way for their stardom. "Brothers in Exile" tells the incredible story of Livan and Orlando "El Duque" Hernandez, who risked their lives to get off the island. Livan left first, banking on his status as the hottest young prospect in Cuba he defected via Mexico and signed with the Florida Marlins, for whom he became one of the youngest World Series MVPs in history in 1997. Staying behind was Orlando, who was banned from professional baseball in Cuba for life because he was suspected of having helped Livan escape. Then, on Christmas 1997, an increasingly frustrated and harassed Orlando left Cuba in a small boat. He was stranded on a deserted island for days before being picked up by the U.S. Coast Guard. Less than a year later, "El Duque" was helping pitch the New York Yankees to a world championship, completing a most unlikely journey for two half-brothers who rode their arms to freedom and triumph.

The viewing guide contains 35 questions that closely follow the film text with a complete answer key, and the film can be found of YouTube. This film shows the complexities of sports, family, politics and culture.

Total Pages
7 pages
Answer Key
Included
Teaching Duration
2 days
Report this Resource to TpT
Reported resources will be reviewed by our team. Report this resource to let us know if this resource violates TpT’s content guidelines.