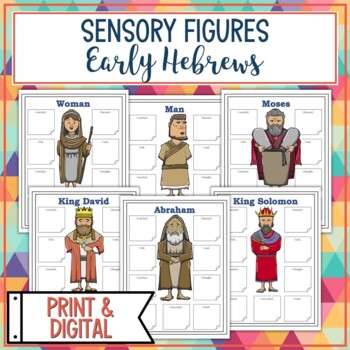 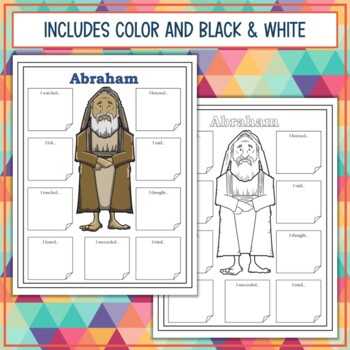 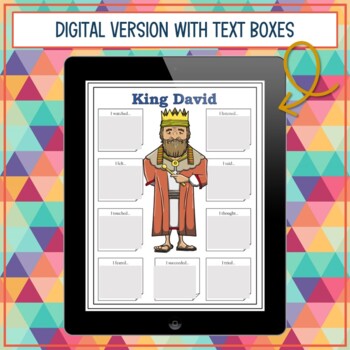 Sensory figures, also known as body biographies, are great for characterization or biography projects and helping students analyze people or characters from multiple angles. Read more about how they can enhance a variety of your lessons below!

The figures can be printed in either black and white or colored versions. This set of six Early Hebrews sensory figures includes both individuals and representatives of groups of people:

A sensory figure is a drawing of a historical, living, or fictional figure with first-person descriptions of what they might have thought, seen, heard, touched, said, felt, or otherwise experienced during their lifetime. Students “show what they know” about the figure by writing 1-2 sentence descriptions for their figure’s thoughts, feelings, and actions. After writing the descriptions, students connect them to the part of the body to which it most closely relates. For example, a feeling might be connected to the heart. The descriptions should be specific to the historical figure’s life, not generic statements that could apply to anyone. Students should be encouraged to address several topics in their descriptions instead of repeating information.

Sensory figures are an engaging way for students to both organize information as they’re learning and demonstrate their knowledge. They can be used to research the figure or even as an assessment after other learning opportunities have taken place. Sensory figures allow students to imagine themselves in their figure’s shoes, thereby gaining a deeper understanding of their figure’s experiences. In addition to focusing on specific people, sensory figures can also be used with groups of people (for example, Confederate soldiers or Loyalists) to define the characteristics that separate them from other groups. Because of their interactive nature, sensory figures are great for interactive notebooks! Finally, they are readily adapted in order to meet a variety of student needs. You can give all students the same figure to fill out, or you can have them complete different ones. I’ve found that students enjoy sharing their figures with partners or doing a gallery walk to see their classmates’ work. You can reinforce vocabulary associated with the figures by providing a word bank of terms students should use in their descriptions.

The figures can be printed in either black and white or colored versions. This set of six Early Hebrews sensory figures includes both individuals and representatives of groups of people:

You may also be interested in other sensory figures:

If you’re interested in other social studies related products, please visit my store!