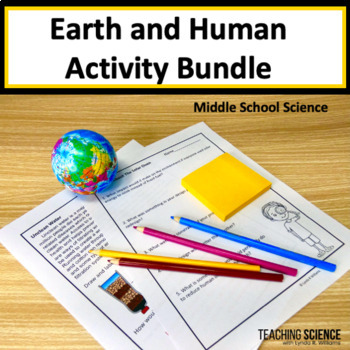 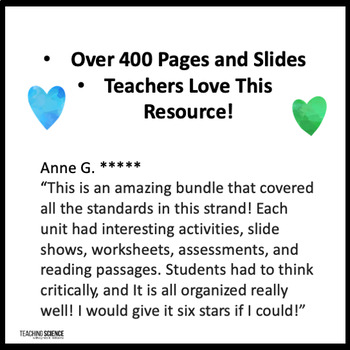 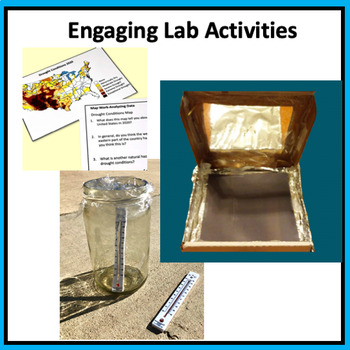 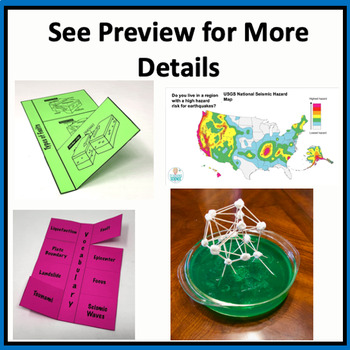 This bundle covers these standards:

Design a solution to monitor or mitigate the potential effects of the use of natural resources. Evaluate competing design solutions using a systematic process to determine how well each solution meets the criteria and constraints of the problem. Examples of uses of the natural environment could include agriculture, conservation efforts, recreation, solar energy, and water management. (ESS3.A, ESS3.C, ETS1.A, ETS1.B, ETS1.C)

Analyze and interpret data on the factors that change global temperatures and their effects on regional climates. Examples of factors could include agricultural activity, changes in solar radiation, fossil fuel use, and volcanic activity. Examples of data could include graphs of the atmospheric levels of gases, seawater levels, ice cap coverage, human activities, and maps of global and regional temperatures. (ESS3.D)

* My resources are secure and not editable for copyright reasons.

These resources are created by Lynda R. Williams at Teaching Science

Follow me and get news of my new resources.  Each new resource is discounted by 50% for the first 24 hours!

You will love my other resources for middle school science!

Total Pages
over 270 slides and pages
Answer Key
Included
Teaching Duration
2 months
Report this Resource to TpT
Reported resources will be reviewed by our team. Report this resource to let us know if this resource violates TpT’s content guidelines.

Log in
to see state-specific standards (only available in the US).
NGSSMS-ESS3-3
Apply scientific principles to design a method for monitoring and minimizing a human impact on the environment. Examples of the design process include examining human environmental impacts, assessing the kinds of solutions that are feasible, and designing and evaluating solutions that could reduce that impact. Examples of human impacts can include water usage (such as the withdrawal of water from streams and aquifers or the construction of dams and levees), land usage (such as urban development, agriculture, or the removal of wetlands), and pollution (such as of the air, water, or land).
NGSSMS-ESS3-4
Construct an argument supported by evidence for how increases in human population and per-capita consumption of natural resources impact Earth’s systems. Examples of evidence include grade-appropriate databases on human populations and the rates of consumption of food and natural resources (such as freshwater, mineral, and energy). Examples of impacts can include changes to the appearance, composition, and structure of Earth’s systems as well as the rates at which they change. The consequences of increases in human populations and consumption of natural resources are described by science, but science does not make the decisions for the actions society takes.
NGSSMS-ESS3-5
Ask questions to clarify evidence of the factors that have caused the rise in global temperatures over the past century. Examples of factors include human activities (such as fossil fuel combustion, cement production, and agricultural activity) and natural processes (such as changes in incoming solar radiation or volcanic activity). Examples of evidence can include tables, graphs, and maps of global and regional temperatures, atmospheric levels of gases such as carbon dioxide and methane, and the rates of human activities. Emphasis is on the major role that human activities play in causing the rise in global temperatures.
NGSSMS-ESS3-1
Construct a scientific explanation based on evidence for how the uneven distributions of Earth’s mineral, energy, and groundwater resources are the result of past and current geoscience processes. Emphasis is on how these resources are limited and typically non-renewable, and how their distributions are significantly changing as a result of removal by humans. Examples of uneven distributions of resources as a result of past processes include but are not limited to petroleum (locations of the burial of organic marine sediments and subsequent geologic traps), metal ores (locations of past volcanic and hydrothermal activity associated with subduction zones), and soil (locations of active weathering and/or deposition of rock).
NGSSMS-ESS3-2
Analyze and interpret data on natural hazards to forecast future catastrophic events and inform the development of technologies to mitigate their effects. Emphasis is on how some natural hazards, such as volcanic eruptions and severe weather, are preceded by phenomena that allow for reliable predictions, but others, such as earthquakes, occur suddenly and with no notice, and thus are not yet predictable. Examples of natural hazards can be taken from interior processes (such as earthquakes and volcanic eruptions), surface processes (such as mass wasting and tsunamis), or severe weather events (such as hurricanes, tornadoes, and floods). Examples of data can include the locations, magnitudes, and frequencies of the natural hazards. Examples of technologies can be global (such as satellite systems to monitor hurricanes or forest fires) or local (such as building basements in tornado-prone regions or reservoirs to mitigate droughts).