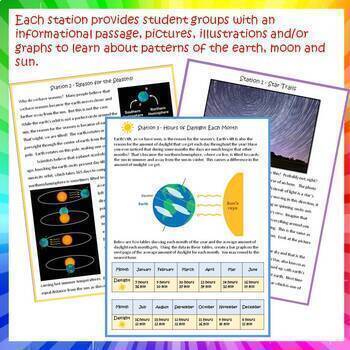 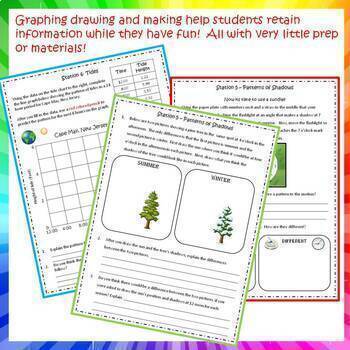 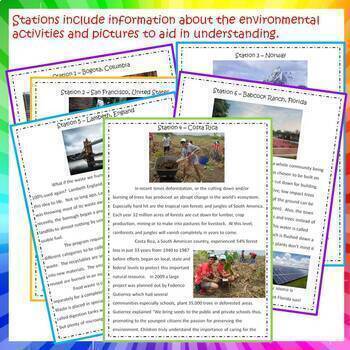 Two amazing station activities with six stations each! Informational text at each station sharpens students reading skills while engaging in scientific ideas and phenomena. Stations align with NGSS standards for Earth and Human Activities and Earth's Place in the Universe.

Highly engaging and collaborative! Students rotate through six stations to learn about amazing and diverse environmental efforts happening around the world. Each station has an informational text to read as well as pictures of the efforts. Graphs and charts accompany some of the stations for students to analyze. After reading the text, students briefly summarize the text before evaluating the overall environmental effectiveness of the efforts. Students use a rating scale to use a guide for determining effectiveness. After completing the stations, students choose a station to evaluate closer before generating ideas to make the efforts even better for the environment.

Station One - Bogota, Columbia - No car Sundays! Students read about a large initiative in Bogota to reduce the amount of pollution emitted by vehicles and to promote exercise by opening up the streets to foot traffic and bicycles only.

Station Two - San Francisco, California - Plastic bag ban. How does a large U.S. city attempt to reduce its use of single use plastic bags? You will have to read about it at station 2!

Station Three - Norway - Sustainable fishing practices. Norway has taken a global lead in assuring that there are plenty of fish for people to eat now AND in the future.

Station Four - Costa Rica - Reversing deforestation. School children, communities as well as the government are pitching in to bring back Costa Rica's dense jungles from the brink of extinction.

Station Five - Babcock Ranch, Florida - Imagine a whole town built on the ideas of sustainability and environmental protection! Students learn about all the practices put into place to create a green town.

Station Six - Lambeth, England - Food uses. Students learn about the ways a town is using food in ways that will reduce dependence on fossil fuels, feed all citizens and even pick a snack at the bus stop!

Patterns of the Earth, Moon and Sun Stations

Six engaging stations take your students on a journey to learn about the predictable patterns of the earth, moon and sun! Each station has an interesting informational text to give students background information as well as how these patterns have been used since ancient times. After students read the informational text and observe the pictures, illustrations and/or graphs they apply what they have learned by answering thought provoking questions, creating graphs from pattern data, exploring concepts using models and even becoming treasure seeking pirates using the stars as direction finders to locate the booty! Very little prep and a few easy classroom materials make this activity an excellent choice to engage students in science concepts while sharpening their informational text reading skills.

Station one – Star trails. Students read about star’s trails before exploring the differences between the North Star and other stars as the earth rotates. Students then become treasure seeking pirates using the North Star to navigate the seas to the lost treasure!

Station Two – Reasons for the seasons! Students learn that seasons exist because of the earth’s tilt rather than distance to the sun! After the reading, students complete a matching activity with diagrams and the different seasons.

Station Three – Hours of Daylight! Students learn why there are more daylight hours in the summer than the winter before completing a bar graph using data of average hours of sunlight per month.

Station Four – The Changing Constellations. Whether near or far, stars makes patterns in our night sky that has captured the imaginations of people for centuries. Students analyze constellation maps of two different seasons to note the similarities and differences. Finally, students create their very own constellation using a group of stars.

Station Five – Patterns of Shadows. Students learn about the length of shadows in relation to the different seasons. Students also learn how ancient people developed a way to tell time using shadows with a sundial. Students sketch shadows of trees in two different seasons before applying their knowledge of sun and earth patterns by creating a simple working sundial.

Station Six – Tides. Students learn about the daily affect of the moon on earth’s waters be reading about tides. Students then create a line graph using tide data before analyzing to find the pattern and making a prediction of tides in the future.

Also included is a stations set up guide with the simple classroom materials to use at each station and a full answer key!

This product is aligned with NGSS units Earth and Human Activity and Earth's Place in the Universe.

Obtain and combine information about ways individual communities use science ideas to protect the Earth’s resources and environment.

Represent data in graphical displays to reveal patterns of daily changes in length and direction of shadows, day and night, and the seasonal appearance of some stars in the night sky.

Determine two or more main ideas of a text and explain how they are supported by key details; summarize the text.

Integrate information from several texts on the same topic in order to write or speak about the subject knowledgeably.

Log in to see state-specific standards (only available in the US).
NGSS5-ESS3-1
Obtain and combine information about ways individual communities use science ideas to protect the Earth’s resources and environment.
NGSS5-ESS1-2
Represent data in graphical displays to reveal patterns of daily changes in length and direction of shadows, day and night, and the seasonal appearance of some stars in the night sky. Examples of patterns could include the position and motion of Earth with respect to the sun and selected stars that are visible only in particular months. Assessment does not include causes of seasons.
CCSSRI.5.9
Integrate information from several texts on the same topic in order to write or speak about the subject knowledgeably.
CCSSRI.5.5
Compare and contrast the overall structure (e.g., chronology, comparison, cause/effect, problem/solution) of events, ideas, concepts, or information in two or more texts.
CCSSRI.5.3
Explain the relationships or interactions between two or more individuals, events, ideas, or concepts in a historical, scientific, or technical text based on specific information in the text.
Total Pages
40 pages
Answer Key
Included
Teaching Duration
1 Week
Report this Resource to TpT
Reported resources will be reviewed by our team. Report this resource to let us know if this resource violates TpT’s content guidelines.