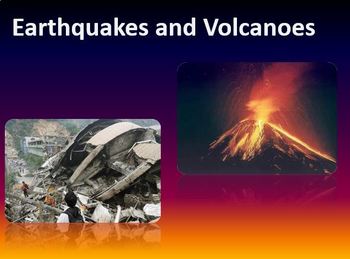 30 Followers
Follow
More products from Cherry G
$8.00
Digital Download
Report this resource to TpT
Product Description
This colorful and detailed PowerPoint and bundle explains the cause of earthquakes, the difference between magnitude (Richter Scale) and intensity (Mercalli Scale), how to triangulate an earthquake and the hazards associated with earthquakes.

Earthquakes are caused when a break in the Earth's surface builds pressure over time and then is suddenly released. The point of the actual movement below the surface is called the focus and the point directly above on the Earth's surface is called the epicenter. There are three types of seismic waves which travel differently through the Earth. This topic is discussed more in depth in the Earth's Interior bundle. The seismic waves can cause damage in the form of shaking, liquefaction, ground displacement, flooding, tsunamis, and fire.

The PowerPoint then continues with volcanoes. It covers types of lava, parts of a volcano, the three types of volcanoes, dormant vs. active volcanoes, hazards associated with volcanoes and volcanoes found in other places within our solar system.

Volcanoes are formed when magma rises to the Earth's surface. The type of magma/lava will determine the type of volcano which is formed. Lava that is very thin and high in iron will form a very different volcano than a lava which is thick, gaseous and lower in iron.

Volcanoes do come with hazards which include the lava, pyroclastics, Nuée ardentes, lahars and toxic gases.

Volcanoes do exist in other locations in the solar system, such as Mars, Venus and Io. And we continue to look for more examples of this volcanic activity in our solar system.

Video links are embedded within the PowerPoint that explain earthquake triangulation and show examples of hazards from both earthquakes and volcanoes.

NOT INCLUDED, but available for purchase:
• Earthquakes - Mercalli Scale Activity
Total Pages
67 pages
Answer Key
Included
Teaching Duration
2 days
Report this Resource to TpT
Reported resources will be reviewed by our team. Report this resource to let us know if this resource violates TpT’s content guidelines.