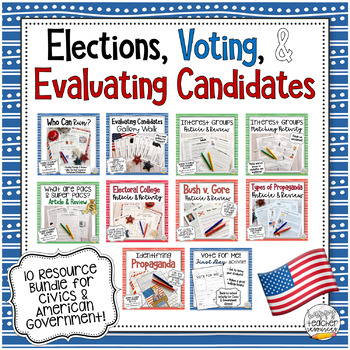 This Elections, Voting, and Evaluating Candidates Bundle has 10 resources to help you teach your middle and high school Civics and American Government students all about United States elections, the electoral college, propaganda, interest groups, PACs and Super PACs! This bundle includes reading passages, a gallery walk, matching activities, and other unique activities to drive these standards home. I've also included my "Vote For Me" student survey, a fun worksheet to use to get to know your students -- you can even use them as campaign posters if you have a classroom election!

This Bundle of 10 Resources includes:

✯ What Is an Interest Group? Article & Review | Voting & Elections for Civics

✯ "Vote For Me" Back to School Activity for Civics and Government

This resource comes as a ZIP file full of non-editable PDFs, with Answer Keys included.

Total Pages
10 lessons and activities
Answer Key
Included
Teaching Duration
2 Weeks
Report this Resource to TpT
Reported resources will be reviewed by our team. Report this resource to let us know if this resource violates TpT’s content guidelines.