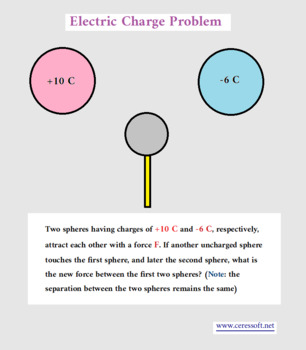 This physics problem is one type of problem that the College Board likes to give to AP Physics students as a multiple choice question. The problem is the following: Two spheres having charges of +10 C and -6 C, respectively, repel each other with a force F. If another uncharged sphere touches the first sphere and later the second sphere, what is the new force between the first two spheres? (Note: the separation between the first two spheres remains the same)