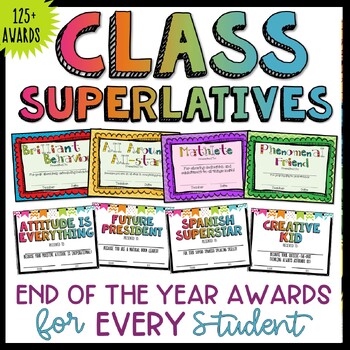 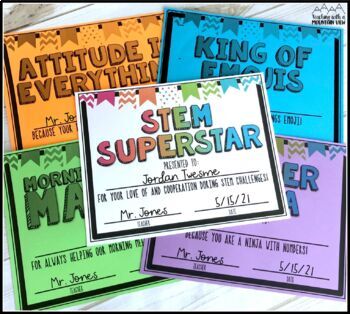 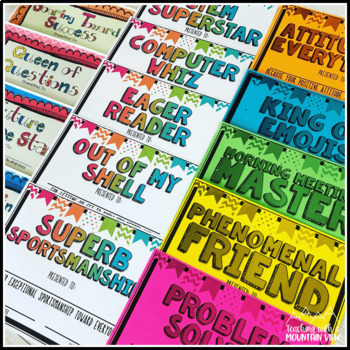 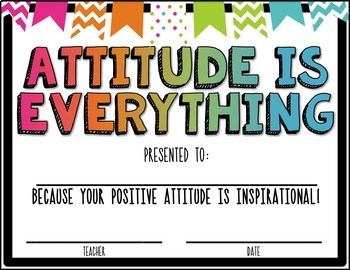 **OVER 115 END OF THE YEAR AWARDS IN MULTIPLE FORMATS, INCLUDING GOOGLE SLIDES!** End of Year Awards Classroom Superlatives are Positive for ALL students! Included are 115 unique award certificates to hand out to kids as awards or superlatives toward the end of the year. You can have students vote on these or choose them yourself. Every single award is unique to your students so no two students get the same award. Your kids will be grinning ear to ear when they receive their award! I began handing out these awards in 2010, and my students have loved them year after year. I hope your students love these end of the year awards as much as mine have!

What you will find in this End of the Year Awards Bundle:

The 115 unique awards include:

Out of My Shell

Soaring toward Success (Most Improved)

Daring Diver (For diving right in)

Stick to It Award (For never giving up)

The "Now I know My ABCs Award"

The Bomb at Baseball

Life of the Party

**Due to many requests, I also have included a separate file with 4 Bible/Prayer Awards for Christian Schools and a file with 3 Canadian Awards with Canadian spelling**

About Custom Awards: I have added a semi-editable slide so that you can add your own CUSTOM awards. This slide is ONLY available in the ink-saver version and allows you to edit the award title and description. Please note that you will need to download specific fonts (information included in the file) to match the other awards.

About Nominations: I have also added a list of all the awards if you choose to have your students nominate them. Also includes an editable nomination form so that you can type in your own list of awards.

End of the year awards

MORE End of the Year Resources!

End of the Year Math Project

End of the Year LITERACY Activity