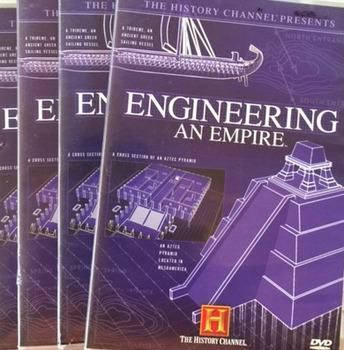 History on Demand
163 Followers
Follow
Compatible with Digital Devices
The Teacher-Author has indicated that this resource can be used for device-based learning.
DescriptionStandards3ReviewsQ&A

This bundle includes video guides and teacher keys for all 14 episodes for the widely popular History Channel's "Engineering an Empire" video series: (individual episodes available on YouTube or on DVD at History Channel or Amazon.com. These video guides are in PDF format so the teacher may use them in TPT's digital online classroom format The guides in this bundle cover the following episodes:

The guides are divided into multiple sections which covers the major periods, events, and leaders of these remarkable empires. The Rome and Egypt episodes are 90 minutes, while the others are approximately 45 minutes each.

The narrative question format with fill in the blank answers span the entire videos and are designed to focus and engage the students throughout. They allow for followup discussion. Included with each episode is an answer key and time codes for starting and stopping the videos at each of the major sections. These videos and guides are excellent activity to integrate as supplemental instruction into existing units, used virtually in Google Classroom, or can be used independently as needed.

You can expect the following:

Please see our related products in our "History on Demand" store. There are an array of PowerPoint Presentations, guided outlines, and other activities that work extremely well with the Engineering an Empire videos to form an entire teaching unit.

Total Pages
98 pages
Answer Key
Included
Teaching Duration
1 month
Report this Resource to TpT
Reported resources will be reviewed by our team. Report this resource to let us know if this resource violates TpT’s content guidelines.