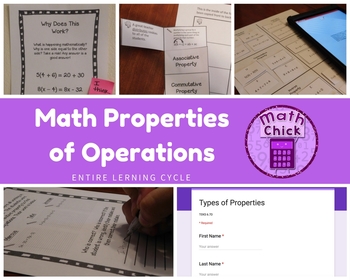 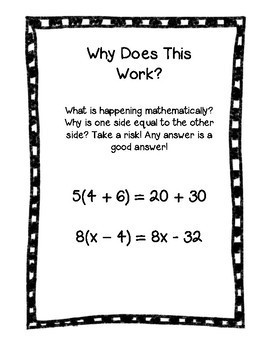 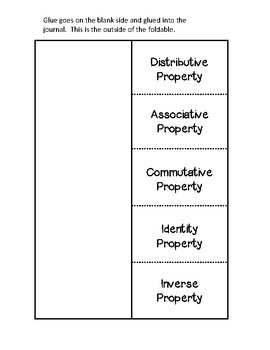 Not sure how to tackle TEKS 6.7D? This download is your ticket to success!

This is a complete learning cycle for how to teach TEKS 6.7D- Generate equivalent expressions using operations the inverse, identity, commutative, associative and distributive properties.

This lesson contains a hook (engagement) and explore, lesson or guided instruction (explain), hands on sort (Elaborate), and assessment or exit ticket (evaluate), I have also included an enrichment piece.

Engage & Explore- Hook- Students will be put into pairs or triplets. SW look at the posters (pgs 3-7) SW will be making assumptions or guesses about what is occurring in the posters. This is without any instruction. Students will simply be looking at the math patterns that are occurring. You can laminated these posters and students could use dry erase markers to write their responses or you can give post its out that students can write their responses on and then place on the poster. If you are using the post its students can also comment on other groups comments.

Explain- This piece is a foldable that includes places for definitions, how to remember the term and an example. I have included a pre-filled out version of the foldable, for guidance for you or for your students who may need note taking assistance.

Evaluate- This is a google form with 10 questions. This could be used as a quick check or exit ticket.

Enrich- The enrichment question offers the students the chance to analyze the math and then justify their response. You could even do the enrichment as an entry ticket the next day.

This learning cycle could take two-three days to complete depending on the amount of class time you have. This lesson also integrates technology for added engagement!