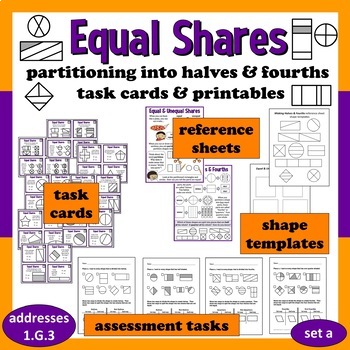 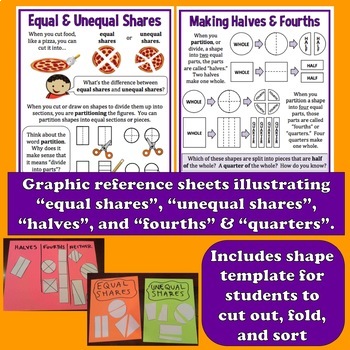 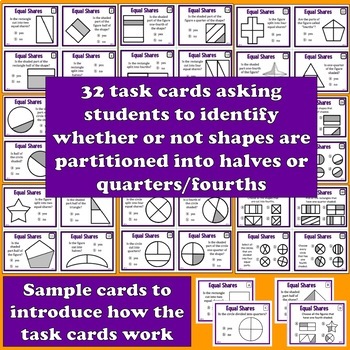 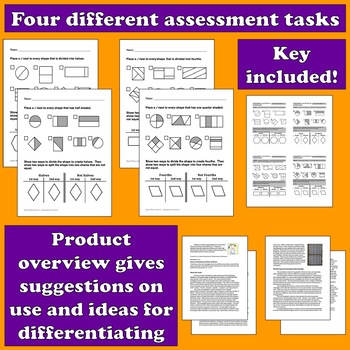 (5 MB|23 pages)
Standards
CCSS1.G.A.3
Build your students' understanding of how shapes can be partitioned into halves and fourths/quarters with this set of task cards and printables. The 32 task cards will provide your students with the practice examining squares, rectangles, circles, and other shapes that are partitioned into two or four equal and unequal shares. Extend your students’ practice (or assess their level of mastery) with the four included assessment activities. With this set of print-and-go resources, your students will grow stronger in their understanding of how geomtric figures can be partitioned.

Common Core State Standards for Mathematics addressed:
Geometry (1.G)
• Partition circles and rectangles into two and four equal shares, describe the shares using the words halves, fourths, and quarters, and use the phrases half of, fourth of, and quarter of. (1.G.3)

This set of cards is designed to help students practice identifying whether or not a given shape, partitioned into sections, is divided into two equal shares or four equal or shares. The cards primarily feature rectangles/squares and circles, though some of the cards feature other geometric shapes, such as trapezoids and triangles. The cards are all multiple choice, and the final 8 cards (cards 25-32) have more than one correct answer. As your students work with the cards, they will apply knowledge of the terms "half", "halves", "fourth", "fourths", "quarter", "quarters", and "equal shares."

The cards are scaffolded to allow students to have multiple opportunities to practice with a given type of shape or a particular number of shares. The first twelve cards feature shapes divided into two shares, sometimes with one of the parts shaded. Students have to identify whether the given whole is divided into halves or if the shaded portion of the shape is half of the whole. Within those twelve cards, the first four feature rectangles and squares, the next four feature circles, and the final four feature other geometric figures. The next set of twelve cards (cards 13-24) follow the same structure – first rectangle/squares, then circles, then other shapes – but each whole is divided into four shares and students have to identify whether the sections are fourths or quarters of the whole. The final eight cards each present four figures divided into sections and the students are asked to select every figure that is divided in a particular way.

This set of task cards includes four sample cards that can be used with the whole class (or a small group if only select students are completing the cards). The four cards are lettered A, B, C, and D, and feature the phrasing and vocabulary used on the other cards in the set. You can use these sample cards in a variety of ways:

• project the four cards and have your kids talk about each one in pairs and then share their thinking about the correct answer
• project the cards one at a time, have students discuss in pairs and then with the group
• organize your students into groups of three or four, give them copies of one or more of the sample cards to think through, and then have the small groups share their reasoning with the whole class
• organize your students into small groups, giving each group a different card to discuss, having the groups share their card and their reasoning after their discussion

When you use the cards themselves, you can also use them in a variety of ways, depending on your students' needs. Since the first twelve cards focus on halves and the next twelve focus on fourths/quarters, you may opt to have the students complete the first twelve cards, in order or out of order, so they first work on just halves, and then work on cards 13-24, practicing with fourths/quarters. You might have students complete the odd-numbered cards with a partner and then complete the even-numbered cards on their own.

There are lots of options for how you can have your students to work on the task cards. This set includes a four-page guide that describes multiple ways to implement the cards to differentiate for varied needs in your class.

The first graphic reference sheet introduces the ideas of "equal shares" and "unequal shares" in a real-world context and defines the term "partition". The sheet then demonstrates how rectangles and circles can be divided and cut into equal shares. The sheet presents students with a number of thinking questions that can be used to spark a class discussion about wholes & parts and equal & unequal shares.

Accompanying this sheet is a resource sheet with pairs of squares, rectangles, and circles that students can cut out and do their own partitioning with. After your class has a discussion prompted by the first reference sheet, you can give them their own squares, rectangles, and circles and ask them to cut them up in different ways to show their own understanding of equal and unequal shares.

The second graphic reference sheet extends the idea of equal and unequal shares, introducing the terms "half", "quarter", and "fourth." Students are shown how rectangles and circles can be cut into halves and quarters, defining those terms as a particular number of equal shares of a whole. This sheet then presents the students with nine figures that are partitioned into two or four sections and asks them which figures are split into halves and which into quarters.

Accompanying this sheet is a second resource sheet, featuring enlarged versions of the partitioned figures shown on the second reference sheet. Your students can cut out the figures on the template sheet and sort them into categories: halves, quarters, and neither, cutting the figures into pieces if necessary to prove that the sections are or are not equal in size.

The four provided assessment activities can be used to evaluate student understanding of partitioning figures into two or four equal shares. All of the activities are formatted the same way - students are first presented with seven partitioned figures and have to identify the ones that are divided into halves or fourths/quarters, and then they are shown a particular shape and asked to partition it to show two (or four) equal shares in two different ways and then partition the same shape to show the same number of shares that are unequal. The first two activities (A & B) focus on halves and the other two (C & D) focus on fourths/quarters.

I hope your students enjoy these resources and are able to build their proficiency with partitioning two-dimensional figures.
Log in to see state-specific standards (only available in the US).
CCSS1.G.A.3
Partition circles and rectangles into two and four equal shares, describe the shares using the words halves, fourths, and quarters, and use the phrases half of, fourth of, and quarter of. Describe the whole as two of, or four of the shares. Understand for these examples that decomposing into more equal shares creates smaller shares.
Total Pages
23 pages
Answer Key
N/A
Teaching Duration
N/A
Report this Resource to TpT
Reported resources will be reviewed by our team. Report this resource to let us know if this resource violates TpT’s content guidelines.