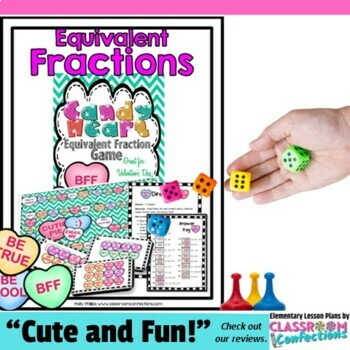 This is a Fun Equivalent Fractions Game - Perfect for Valentine's Day or any day.This equivalent fraction game has a Valentine candy theme. Students will draw a card and then look at the circled part. They will name the circled part in two ways. Based on whether they get it right or not will determine if they move around the board. Directions are included.

You can also purchase this file as part of a BUNDLED pack.
Valentine’s Day Themed BUNDLE


Included are: cover sheet if you choose to use it as a file folder center, adorable Valentine themed game board that can be used with other game cards, 20 valentine candy fraction cards, directions, and answer key.

This works perfectly for a math center.

NOTE: There was a technical error with the original file and the answer key being mixed up. I have corrected it and reworked the game. It is even cuter than the first one :-)

For more creative lesson ideas, please click on 'elementary lesson plans' by my picture above.