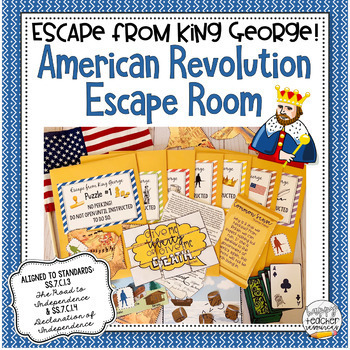 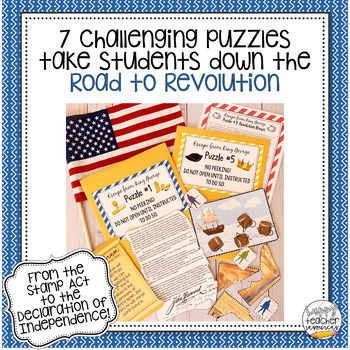 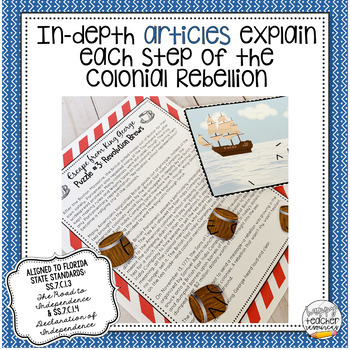 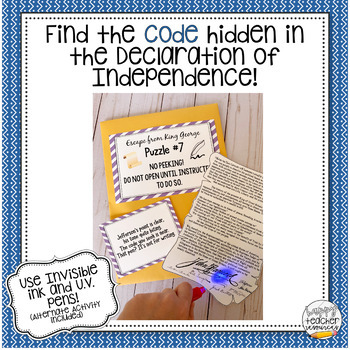 Happy Teacher Resources
439 Followers
Follow
Compatible with Digital Devices
The Teacher-Author has indicated that this resource can be used for device-based learning.

Can you solve the puzzles in time and escape from the clutches of King George? On this road to rebellion, students will read articles, solve hands-on puzzles, and find codes that will unlock pages in an Escape From King George! Google Form. This Escape from King George! Escape Room is immersive and informative. Teach the build-up to the American Revolution by immersing your students in the Colonial Rebellion!

[Clarification: The Escape Room is entirely physical/hands-on. The digital component refers to the Google Form used to input the codes to unlock each level. There is NOT a digital version of the entire Escape Room!]

Each of the seven (7!) puzzles in this Escape Room come with an accompanying article covering a different aspect of the American Revolution.

** Because the codes all unlock in a Google Form, internet access is required for this Escape Room! **

Besides the seven articles and puzzles, this activity comes with a 4-page review packet that reinforces the key concepts of the articles.

The review asks such questions as:

Plus, the review includes a short essay response prompt:

To give you an idea of what all is included in this Escape (the PDF is 66 pages long!), let me explain the puzzles:

The Escape Room also includes a celebratory "WE ESCAPED FROM KING GEORGE!" poster you can have kids hold up if you want to take some victory pictures for the winners!

Aligned to the Florida State Standards for Middle School Civics: SS.7.C.1.3 The Road to Independence & SS.7.C.1.4 Declaration of Independence, I use this Escape Room in my 7th Grade Civics class, but it is challenging and complex enough, plus in-depth enough, to be used in any middle or high school Civics, Government, or American History classroom!

This resource comes as a PDF and includes a link to a Google Form.

* Pathway to Citizenship Board Game | Naturalization Process Game for Civics!

Follow Happy Teacher Resources so you're first to find out about new products!

Total Pages
66 pages
Answer Key
Does not apply
Teaching Duration
1 hour
Report this Resource to TpT
Reported resources will be reviewed by our team. Report this resource to let us know if this resource violates TpT’s content guidelines.