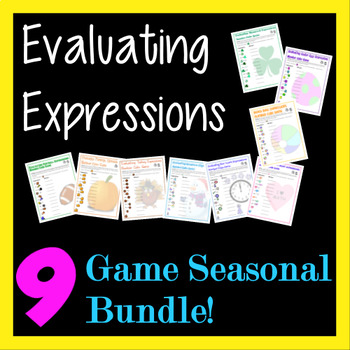 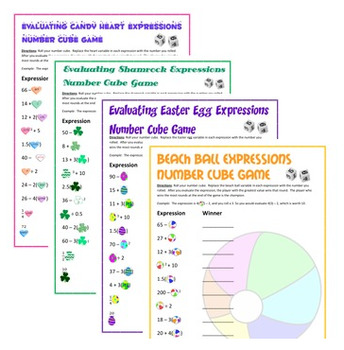 Mathematic Fanatic
3.1k Followers
Follow
Compatible with Easel Activities
This resource is compatible with Easel by TpT, a suite of digital tools you can use to make any lesson interactive and device-ready. Customize this activity and assign it to students, all from Easel. Easel is free to use! Learn more.
DescriptionReviews5Q&A

Quick, simple, and fun for your students, these number cube game could take as little as 10 minutes or as long as half an hour. You can have kids switch partners after each game, make it a tournament, and play as long as you would like!

With your purchase, you receive 9 seasonal number cube games! Your students will become experts at evaluating expressions with these fun, seasonal games. There are 9 varieties, one for each month of the school year!

These directions are included at the top of the page: Roll your number cube. Replace the football variable in each expression with the number you rolled. The variables include a variety of fun, colorful, seasonal objects, such as footballs, snowmen, shamrocks, or beach balls. After you evaluate the expression, the player with the greatest value wins that round. The player who wins the most rounds at the end of the game is the champion.

If your opponent's roll results in a number greater than 10, they win. If not, you win.

If you would like to check out the 9 individual versions, you can click on the links below: