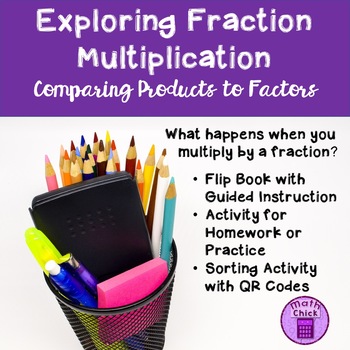 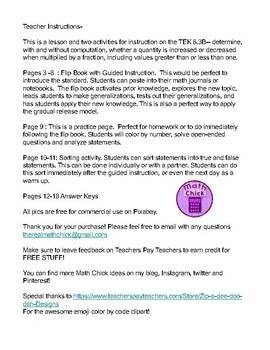 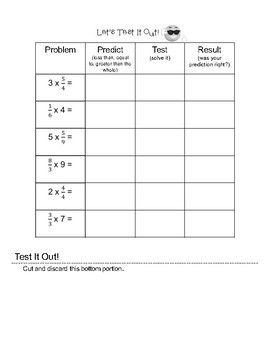 Need help teaching TEKS 6.3B? TEK 6.3B-- determine, with and without computation, whether a quantity is increased or decreased when multiplied by a fraction, including values greater than or less than one.

Look no further! This download has everything you need to fully instruct students as well as keep them engaged and learning about what happens when you multiply a fraction.

Pages 3 -8 : Flip Book with Guided Instruction. This would be perfect to introduce the standard. Students can paste into their math journals or notebooks. The flip book activates prior knowledge, explores the new topic, leads students to make generalizations, tests out their generalizations, and has students apply their new knowledge. This is also a perfect way to apply the gradual release model.

Page 9 : This is a practice page. Perfect for homework or to do immediately following the flip book. Students will color an emoji by number, solve open-ended questions and analyze statements.

Page 10-11: Sorting activity. Students can sort statements into true and false statements. This can be done individually or with a partner. Students can do this sort immediately after the guided instruction, or even the next day as a warm up or entry activity. This could also be used as a formative assessment. The sort also comes with QR codes to allow students the ability to receive instant feedback!