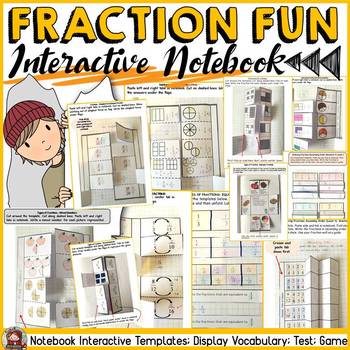 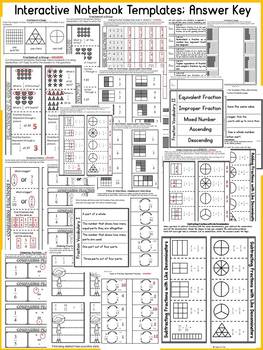 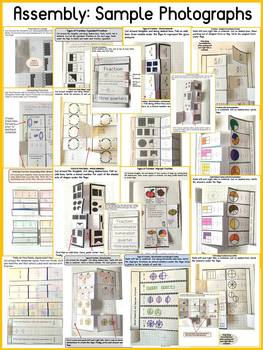 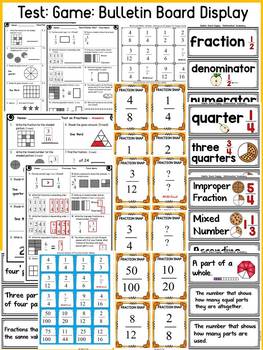 As educators, we certainly know, that to present a truly complex concept, one needs to break it down into more digestible components and in keeping with this analogy, this unit on fractions offers a delectable spread of fun fraction interactives that break down and greatly simplify the teaching of fractions. Other than interactive notebook activity sheets, you will also find a fraction game to break the monotony and a 20 questions Fraction test to assess taught content.

Experience shows that teaching fractions has always been unconsciously challenging, hence the interactives are especially great for the academically challenged as they break down complex material into learnable chunks.

Students love the interactive notebook sheets. I have seen great improvement in terms of attitude and performance in the most reluctant - wish we were taught in a similar fashion back in the good old days :).

3. BULLETIN BOARD DISPLAY: 10 word cards and 10 definition cards that can be arranged on a bulletin board to provide a visual display of key mathematical terminology when working with fractions.

4. FRACTIONS OF A SHAPE: 2 x 8 flap foldables to identify fractions of the shaded areas; single sheet activity to color the given fraction amounts.

5. FRACTIONS OF A GROUP: 1 x 8 flap template to identify fractions of given arrays and provide a visual representation.

7. ORDERING FRACTIONS (DESCENDING ORDER): 4 vertical accordion-style templates to order given fractions from greatest to least. Students can refer to the included fraction wall.

12. SIMPLEST FORM (LOWEST TERMS) OF FRACTIONS: 1 x 10 flaps template to simplify given fractions. Students show working out on the outside of the flap and write the fraction in its lowest term on the inside of the flap.

13. ADDING AND SUBTRACTING FRACTIONS WITH LIKE DENOMINATORS: 2 x 10 flaps visual templates to enable students to color in the given sets of shapes to show addition and subtraction of fractions.

14. SUBTRACTING FRACTIONS FROM A WHOLE: 1 x 10 flaps template to subtract fractions from a whole by renaming the whole to make it simpler. Students color in the given sets of shapes to show the remaining fraction.

16. FRACTIONS ON A NUMBER LINE: 1 x 6 vertical accordion style flaps to mark fractions with denominators 2,3,4, 6 and 12 on number lines.

18. FRACTIONS TEST: 20 questions to assess skills acquired in this unit on fractions. Answer sheets to all questions included.

⭐ Equivalent Fraction Snap game comes with instructions to play and a cheat sheet. There is a colored version as well as a black and white one of the game.

⭐ Answer sheets to all activity sheets are included. This is especially handy, as answer sheets can be displayed on the interactive whiteboard for students to self-check. This saves you loads of marking, besides it is an invaluable learning moment as students take note of their mistakes.

⭐ Interactive templates are designed to be time-saving as they feature more learning content and minimize on unnecessary cutting (8 and 10 flaps).

⭐ Clear-cut instructions accompanied with photos for assembling the interactive sheets.

✅ THE PLANETS OF THE SOLAR SYSTEM FLIPBOOK

Total Pages
108 pages
Answer Key
Included
Teaching Duration
2 Weeks
Report this Resource to TpT
Reported resources will be reviewed by our team. Report this resource to let us know if this resource violates TpT’s content guidelines.