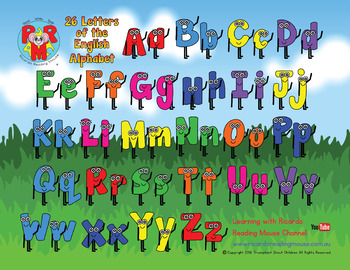 26 Letters of the English Alphabet Song

Children can use the poster with the song and/or:

1. point to each letter and say the alphabet in alphabetical order;

2. throw a dice, and say the name or sound of the letter that the dice lands on. If correct, place a counter and if incorrect, no counter. Play with a sibling or classmate and see who gets the most counters.

3. Sing along to the 26 Letters of the English Alphabet song

Print on card and laminate for repeated classroom use or

use as a classroom gift or reward for fulfilling the goal of learning the ABC's:)

Visit my website to find out more about Ricardo Reading Mouse® children's ABC and Learn to Read apps and other educational resources too!

Total Pages
1 page
Answer Key
Does not apply
Teaching Duration
N/A
Report this Resource to TpT
Reported resources will be reviewed by our team. Report this resource to let us know if this resource violates TpT’s content guidelines.