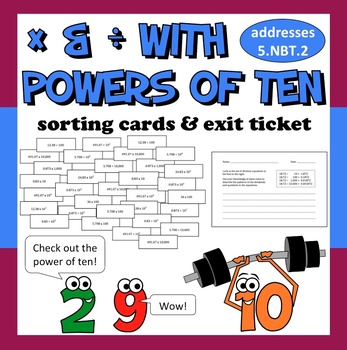 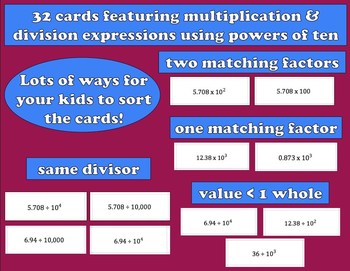 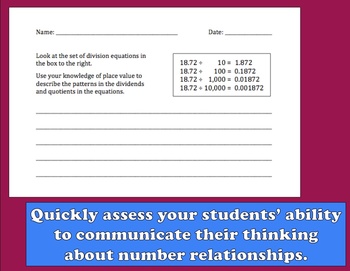 Provide your students a chance to explore with patterns and number relationships with this set of sorting cards. These cards allow for multiple uses and can be the springboard for rich mathematical discussions about and multiplying and dividing with powers of ten, helping address both Common Core standards for Number and Operations in Base Ten as well as the Standards for Mathematical Practice.

Common Core State Standards for Mathematics addressed:
Numbers and Operations in Base Ten (5.NBT)
Understand the place value system.
• Explain patterns in the number of zeros of the product when multiplying a number by powers of 10, and explain patterns in the placement of the decimal point when a decimal is multiplied or divided by a power of 10. Use whole-number exponents to denote powers of 10. (5.NBT.2)

There are 32 cards in all, formatted 16 to a page. The cards present multiplication and division expressions (16 of each) using a decimal or whole number as one of the factors and a power of ten as the other factor. Each expression is written on two different cards – one card uses the standard form of the given power of ten and the other card uses the exponent form. For instance, one card reads, “0.873 x 1,000” and the corresponding card reads, “0.873 x 10^3.” In addition, the “non-power of ten” factors are used in both a multiplication equation and a division equation. The factor 0.873, for example, is the factor on one pair of cards (0.873 x 1,000/10^3) and the dividend on another pair of cards (0.873 ÷ 10/10^1 ).

There are many ways that you can use these sorting cards. When I first used them, I simply gave them to my kids – one set for each four students – and told them to lay them out, read them, and see what they noticed. While the groups talked, I walked around and listened in on their conversations. As the students started to notice commonalities among some of the cards, we began a rich conversation about the various expressions. They were thinking, engaged, and used a ton of math vocabulary – everything I hope for in a whole group discussion!

Give your students an opportunity to show their understanding in writing with the included half-page exit ticket. This exit ticket presents the students with a series of division equations that use a power of ten (expressed in standard form) and asked them to use their knowledge of place value to describe the patterns in the dividends and quotients. You can use this as an assessment after the students have had a chance to explore with multiplying and dividing with powers of ten or as an instructional activity, discussing with the students the patterns in the equations, charting the vocabulary that you elicit from them, and then having them write about the equations using the vocabulary you charted.

If your students need more practice with multiplying and dividing decimals by powers of ten, please check out my Bird Brains set of task cards + printables. The Bird Brains set includes 64 task cards, a place value mat & digit cards, and 8 different assessment activities, including 4 original exit tickets, similar to the one included in this product.


I have other resources as well that address number and operation in base ten, including:


I hope your students enjoy these resources and are able to build their proficiency with multiplying and dividing with powers of ten. – Dennis McDonald
Total Pages
4 pages
Answer Key
Included with rubric
Teaching Duration
N/A
Report this Resource to TpT
Reported resources will be reviewed by our team. Report this resource to let us know if this resource violates TpT’s content guidelines.