FREEBIE: Back to Square 1-4-5 (Scientific Knowledge and a Double Square Puzzle) 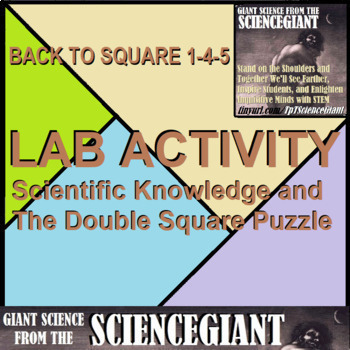 TheScienceGiant
313 Followers
Follow
Made for Google Drive™
This resource can be used by students on Google Drive or Google Classroom. To access this resource, you’ll need to allow TpT to add it to your Google Drive. See our FAQ and Privacy Policy for more information.

Start the Science class with one (1) square. It's simple, because one square is unambiguous. But then challenge students to take four (4) polygons and arrange them together to make a square shape. A-ha! That's trickier. Like Science, there can be many hypothesis on how they fit together, but the best solution solves the puzzle. If it doesn't work, it's back to square one.

This lab activity gets students/student teams to think about the nature of science, and also, to show the importance of being an active participant in the learning process. Ss should realize that science is dynamic, and it changes as knowledge of a subject increases. Because there's a final challenge: integrate all five (5) polygon pieces from the previous puzzles together to make a super-square -- just like when a new piece of evidence emerges from experimentation and has to be included in any scientific explanation.

This resource uses a puzzle which includes five interfitting pieces, four of which can form a square and all five of which can be fit together collectively form a larger square. Just copy, cut out, give to kids to crack the puzzles, and let the class consider how scientific knowledge is open to revision in the light of new evidence.

And as an in-class example, I've adapted the Question Exploration on What Helps Proves Post-Pangaea Plate Tectonics. Wegener's Puzzling Continental Drift Evidence is a great case study to have students grasp the concept of how scientists look for clues.

This Content Enhancement Routines are classroom tested to help students with the following Florida Next Generation Sunshine State Standards in Science:

Help others #StandOnTheShouldersOfGiants -- leave a review for this resource! And it helps you #SeeFurther too -- you earn 1 credit for every $1 spent on TpT resources. Each credit has a value of 5 cents, so 20 credits earned equals $1 to apply to future TpT purchases.

#StayGiant and stay up on my new resources and STEM news. Look for the green ★ star near the top of any page within my store and click "FOLLOW". Or follow @TheScienceGiant Twitter. Stand on the Shoulders of Giants, and together we'll see further, inspire students, and enlighten inquisitive minds!

Log in
to see state-specific standards (only available in the US).
NGSSMS-ETS1-3
Analyze data from tests to determine similarities and differences among several design solutions to identify the best characteristics of each that can be combined into a new solution to better meet the criteria for success.
NGSS3-5-ETS1-2
Generate and compare multiple possible solutions to a problem based on how well each is likely to meet the criteria and constraints of the problem.
NGSS3-5-ETS1-1
Define a simple design problem reflecting a need or a want that includes specified criteria for success and constraints on materials, time, or cost.
NGSS3-5-ETS1-3
Plan and carry out fair tests in which variables are controlled and failure points are considered to identify aspects of a model or prototype that can be improved.
NGSSMS-ETS1-2
Evaluate competing design solutions using a systematic process to determine how well they meet the criteria and constraints of the problem.