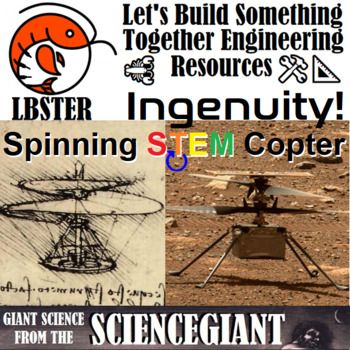 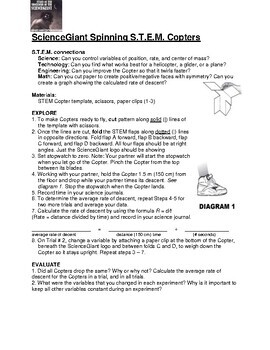 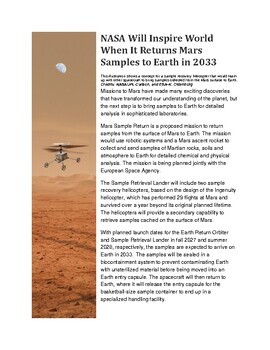 Inexpensive and ingenious! Let's Build Something Together Engineering Resources (LBSTER) invites students to create a Spinning STEM Copter and improve the design, like NASA engineers did when making the Mars 2020 helicopter.

Ts can scale the sophistication and schedule of the investigation up or down. I've done this with kindergarteners (and dropped any data collection; just looked at rotor results), and I've challenged my AP Physics 1 Ss (and scrutinized the slope of their graphs with them).

This product also includes an activity from NASA for Ss to build a model of Ingenuity helicopter using marshmallows, toothpicks, and cardstock. It won't fly, but it will look tasty! [as always BE ALERT TO STUDENT’S FOOD ALLERGY WARNINGS! Products may contain nut and other allergens]. The purpose of this inquiry-based explorations is to stimulate students’ curiosity and to engage them in activities that involve using the scientific method and measurements, and investigate the meaning of a model and how models are used in scientific research.

These activities have the following learning objectives and outcome.

Students Will Be Able To (SWBAT/I Can):

These activities are classroom tested to help students with the following Florida Next Generation Sunshine State Standards in Science:

Help others #StandOnTheShouldersOfGiants -- leave a review for this resource! And it helps you #SeeFurther too -- you earn 1 credit for every $1 spent on TpT resources. Each credit has a value of 5 cents, so 20 credits earned equals $1 to apply to future TpT purchases.

#StayGiant and stay up on my new resources and STEM news. Look for the green ★ star near the top of any page within my store and click "FOLLOW". Or follow @TheScienceGiant Twitter. Stand on the Shoulders of Giants, and together we'll see further, inspire students, and enlighten inquisitive minds!

Total Pages
14 pages
Answer Key
Rubric only
Teaching Duration
1 hour
Report this Resource to TpT
Reported resources will be reviewed by our team. Report this resource to let us know if this resource violates TpT’s content guidelines.

Log in
to see state-specific standards (only available in the US).
NGSSHS-PS2-3
Apply scientific and engineering ideas to design, evaluate, and refine a device that minimizes the force on a macroscopic object during a collision. Examples of evaluation and refinement could include determining the success of the device at protecting an object from damage and modifying the design to improve it. Examples of a device could include a football helmet or a parachute. Assessment is limited to qualitative evaluations and/or algebraic manipulations.
NGSSMS-PS2-5
Conduct an investigation and evaluate the experimental design to provide evidence that fields exist between objects exerting forces on each other even though the objects are not in contact. Examples of this phenomenon could include the interactions of magnets, electrically-charged strips of tape, and electrically-charged pith balls. Examples of investigations could include first-hand experiences or simulations. Assessment is limited to electric and magnetic fields, and limited to qualitative evidence for the existence of fields.
NGSSMS-ETS1-3
Analyze data from tests to determine similarities and differences among several design solutions to identify the best characteristics of each that can be combined into a new solution to better meet the criteria for success.
NGSSK-PS2-2
Analyze data to determine if a design solution works as intended to change the speed or direction of an object with a push or a pull. Examples of problems requiring a solution could include having a marble or other object move a certain distance, follow a particular path, and knock down other objects. Examples of solutions could include tools such as a ramp to increase the speed of the object and a structure that would cause an object such as a marble or ball to turn. Assessment does not include friction as a mechanism for change in speed.
NGSS5-PS2-1
Support an argument that the gravitational force exerted by Earth on objects is directed down. “Down” is a local description of the direction that points toward the center of the spherical Earth. Assessment does not include mathematical representation of gravitational force.