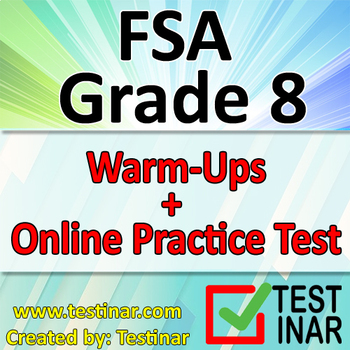 Need Math sample questions and warmups to give your students the opportunity to be constantly re-exposed to previously taught skills?

This product offers an amazing set of FSA Grade 8 prep math warmups. FSA Grade 8 Math warmups help students brush up in math and prepare for the FSA Grade 8 math test. Each warmup page contains few sample math questions related to one FSA Grade 8 math topic. For each topic, there is a one-page warm up and the answers are on the second page. This is a great resource to supplement your test prep!

The Math warmups are perfect to use throughout the FSA Grade 8 Preparation Course, or as a review before end-of-course testing. They can be used for FSA preparation, or FSA practice when class begins. There are also abundant online practice questions. Simply scan the QR barcode and find abundant online practice questions. The warmups are in a bright interactive format to encourage students to work effectively.