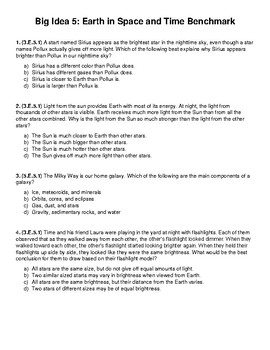 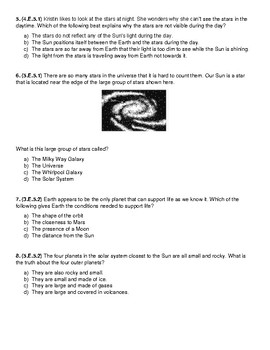 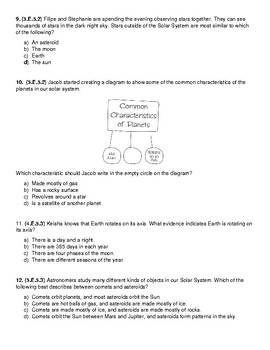 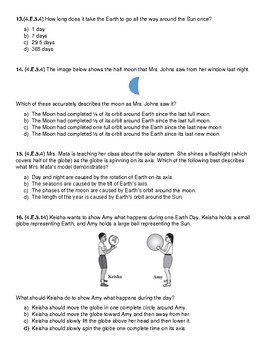 All questions labeled with standard.

Grading Scale broken down by item number and standard included.

3.E.5.1: Explain that stars can be different, some are smaller, some are larger, and some appear brighter than others; all except the Sun are so far away that they look like points of light.

4.E.5.1: Observe the patterns of the stars in the sky stay the same although they appear to shift across the sky nightly, and different stars can be seen in different seasons.

5.E.5.1: Recognize the galaxy consists of gas, dust, and many stars, including any objects orbiting around stars. Identify our home as the Milky Way.

3.E.5.2: Identify the Sun as a star that emits energy; some of it in the form of light.

4.E.5.2: Describe the changes in the observable shape of the Moon over the course of a month.

5.E.5.2: Recognize the major common characteristics of all planets and compare/contrast the properties of inner and outer planets.

3.E.5.3: Recognize that the Sun appears large and bright because it is the closest star to Earth.

4.E.5.3: Recognize that Earth revolves around the Sun in a year and rotates on its axis for 24 hours a day.

5.E.5.3: Distinguish between the following objects in the solar system: Sun, planets, moons, asteroids, comets, and identify Earth’s position in it.

4.E.5.4: Relate that rotation of Earth (day and night) and apparent movements of the Sun, Moon, and stars are connected.