Fahrenheit 451 by Ray Bradbury: Three Quizzes, one for each part of novel 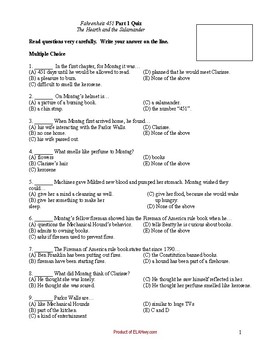 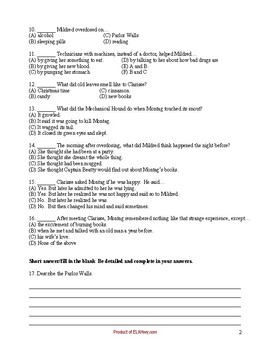 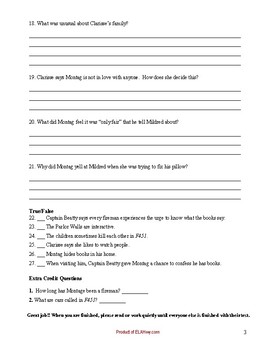 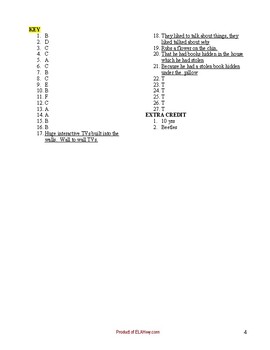 Fahrenheit 451 by Ray Bradbury quizzes. Three quizzes, one for each section of the novel.

Three quizzes, one for each section of the novel
-These were made for students who are 1-2 below grade level. Example questions below.
-Answer keys attached
-11 pgs total

The Hearth and the Salamander Quiz:

<>In the first chapter, for Montag it was…

<>The Fireman of America rule book states that since 1790…
A) Ben Franklin has been putting out fires.  (B) fireman have been starting fires.  (C) the Constitution banned books.  (D) a hound has been part of a firehouse.

<>What did Montag feel it was “only fair” that he tell Mildred about?

<>When visiting him, Captain Beatty gave Montag a chance to confess he has books. [T/F]

<>Faber did not want to help Montag at first. [T/F]

<>Why did Montag kill Captain Beatty?
(A) Beatty was rude to Montag. (B) Beatty asked to be killed. (C) Montag killed Beatty because he was jealous of Beatty’s position as captain of the firehouse. (D) Montag was protecting Faber from Beatty. (E) Faber told
Montag that he needed to kill Beatty.

<>What was new and different about Montag’s experience of fire when he was in the countryside? Describe the experience with at least two details.

<>Granger compared people to the Phoenix bird.  In what way was he comparing them?

Total Pages
11 pages
Answer Key
Included
Teaching Duration
3 Weeks
Report this Resource to TpT
Reported resources will be reviewed by our team. Report this resource to let us know if this resource violates TpT’s content guidelines.