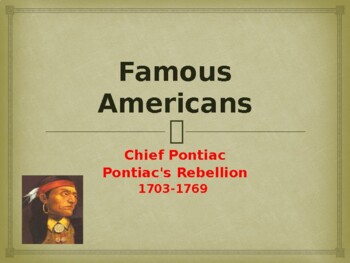 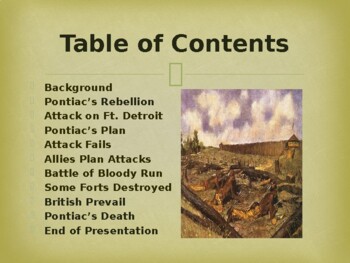 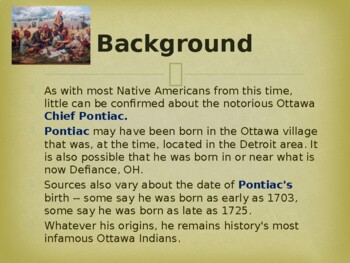 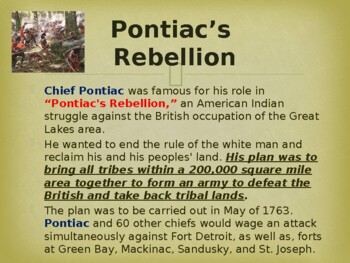 This is a 13 slide, highly animated, power point presentations on Famous Americans – Chief Pontiac. Each of the presentation slides are editable so you can change it to fit your individual needs.

Chief Pontiac was famous for his role in “Pontiac's Rebellion,” an American Indian struggle against the British occupation of the Great Lakes area. He wanted to end the rule of the white man and reclaim his and his peoples' land.

His plan was to bring all tribes within a 200,000 square mile area together to form an army to defeat the British and take back tribal lands. The plan was to be carried out in May of 1763.Pontiac and 60 other chiefs would wage an attack simultaneously against Fort Detroit, as well as, forts at Green Bay, Mackinac, Sandusky, and St. Joseph.

In the spring of 1764, two British armies were sent out, one into Pennsylvania and Ohio under Colonel Bouquet, and the other to the Great Lakes under Colonel John Bradstreet. Bouquet’s campaign met with success, and the Delawares and the Shawnees were forced to sue for peace, breaking Pontiac’s alliance.

Failing to persuade tribes in the West to join his rebellion, and lacking the hoped-for support from the French, Pontiac finally signed a treaty with the British in 1766.