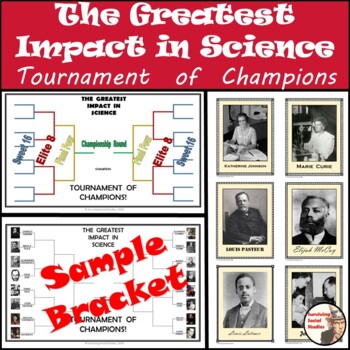 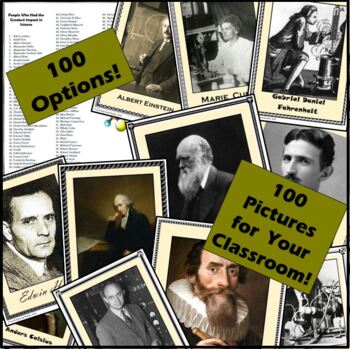 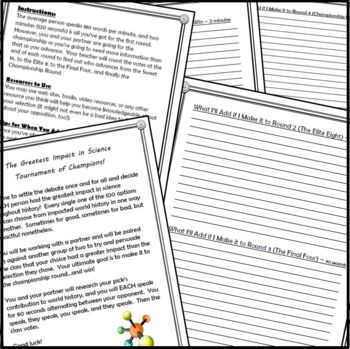 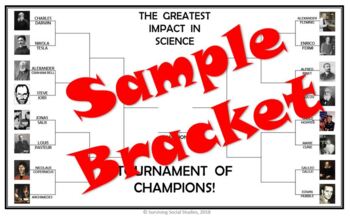 (146 MB|111 pages)
Product Description
As a middle school teacher, it can definitely be a challenge to keep middle schoolers engaged and on-task as the year comes to a close. A friend who is a science teacher in the same district I work in asked me about my U.S. History Tournament of Champions and if I would make one for famous scientists - so here it is!

Tell Your History Teacher Friends About These:

Please note - I have made this bracket fully editable for you with instructions, but you will need MS PowerPoint to open/edit the Tournament Bracket and MS Publisher to add/change possible contenders

I chose 100 people from the field of Science that made a big impact - for good or for bad. Included is an NCAA March Madness style tournament bracket, which is fully-editable. Students will work in pairs to prepare a persuasive speech on why the class should vote for their topic. The first day of the actual tournament, during the Sweet 16 round, I have the class vote on each topic after the two groups present and then I tally the scores. The winners are announced and the Elite 8 bracket is established. On the second day of the actual tournament, the time for each speech is lessened which allows you to get through the Elite 8, Final Four, and possibly the championship round. This has been my Tuesday through Friday final activity of the year, which is during the last week before finals.

This tournament is SO much fun for us so I hope you and your students enjoy it as well!

For a GREAT classroom management tool check out my BEST-SELLER!
Student Conferencing "Deli-Style"

Connect with Surviving Social Studies...
Be sure to follow my TpT store by clicking on the ‘Follow Me’ next to my logo to receive notifications of new products and upcoming sales.

Thanks for stopping by!
Surviving Social Studies

Terms of Use:
Copyright ©Surviving Social Studies. All rights reserved by author. This product is to be used by the original downloader only. Copying for more than one teacher, classroom, department, school, or school system is prohibited. This product may not be distributed or displayed digitally for public view. Failure to comply is a copyright infringement and a violation of the Digital Millennium Copyright Act (DMCA). The images in this file were all located in the public domain. Intended for classroom and personal use ONLY.