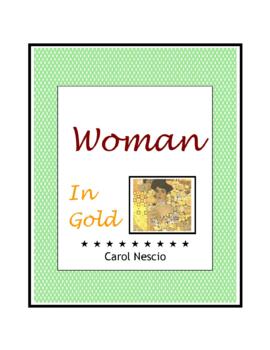 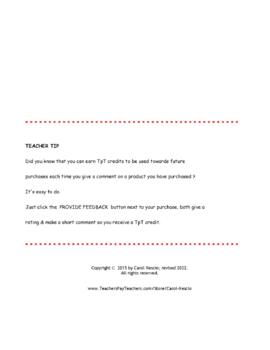 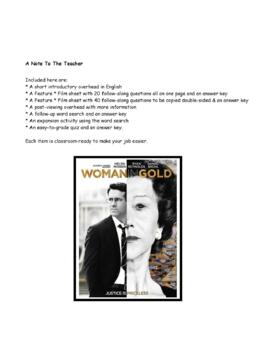 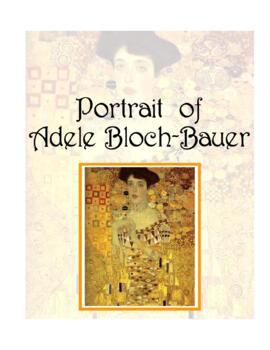 "I can paint and draw. I believe this myself and a few other people say that

they believe this, too. But I'm not certain of whether it's true."

Years after World War II had ended, Maria Altmann, who had fled as a young Austrian Jewish woman to America during the war, tries to prove that the painting of her aunt - Portrait of Adele Bloch-Bauer - done by renowned Austrian artist Gustav Klimt and hanging in the Belvedere Gallery in Vienna - was actually willed to her and ought to be in her possession.

This is the true story of her tug-of-war with the Austrian authorities in her attempt to get the painting back.

But who would win ?

1. A 2-page introductory overhead with some background information

2. A Feature * Film sheet with 20 follow-along questions in English all on one page

4. An 8-page post-viewing overhead with more information about the film

it looking down writing out answers and, thus, not miss

This film - Woman In Gold with Helen Mirren - can be used as enrichment to a topic or as a substitute lesson plan (or emergency lesson plan).

A gem of a film about a woman's quest - against all odds - to reclaim what was rightfully hers. (15 pages)

This film is one of twelve in my

Want your students to learn about the mystery of another

If you're looking for more time-saving resources, you may be interested in these other items in my store:

* Feature * Film ~ Swing Kids .. Even dancing was dangerous under The Third Reich. ..

* Feature * Film ~ The Garden of the Finzi-Continis

Where was she ? Who took her ? This documentary explains it ..

* Berlin ~ Post-War Timeline .. You can't help but mention this iconic symbol of

The Cold War when you're teaching German. Here's a brief overview ..