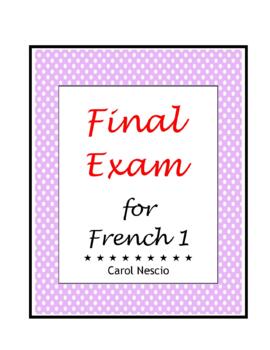 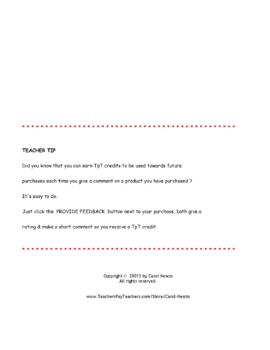 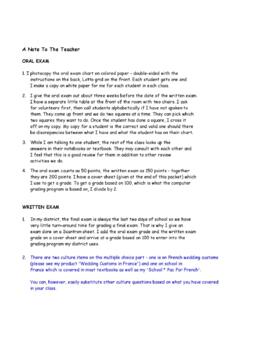 "To teach is to learn twice."

This final exam includes an oral part worth 50 points (25 questions) and a written part worth 150 points (150 multiple choice questions). Since our turn-around time was extremely short for final grades, the written questions are answered on a Scantron sheet.

The bingo card format for the oral part is also a great review exercise as students try to find the answers in their books and notes.

The written score combined with the oral score gives a final exam grade based on 100 which is easy to enter into the computer grading programs. Simple instructions are given on how to put the two grades together to get a grade based on 100.

The points covered in this level 1 exam are:

21. some European countries and their capitals

The 25 oral question part is stated in English and the student responds in French. I do this in class starting about two weeks before the written final. I explain in detail how each student gets the chance to answer all 25 questions.

This can also be used as a review exercise before your students take your own final or a mandatory department final exam.

It can also be shortened to just five or ten questions if time is short.

An answer key is provided for the written part of the exam.

The culture questions come from my School * Pac For French which is separate from this exam document.

You can, however, substitute other questions on topics which you have covered in your class.

Also included is a list of the room vocabulary that I present to be used as a homework (or review) assignment and a second homework assignment to reinforce those words.

Everything is classroom-ready to make your job easier. (33 pages)

In need of a French 2 final as well ?

Looking for a sweet way to end the year ?

"This is extremely thorough. I wish I had bought it at the beginning of the year ... it's very organized and its sequence makes total sense to me. Another truly great product from Carol ..."

If you like my products, please follow me by clicking on the little star at the top under my name. Merci.

* Wordle Activity * Pac For French .. Be prepared for Excitement with a capital E ! ..

* Wedding * Customs In France .. Nice to talk about a few days before La St.-Valentin. ..

* French Baby * Names .. It's free ~ Most students like the cachet of having a special French name

for French class ~ here are some easy-to-use, A to Z lists for them to choose from ..

* The Food * Pac For French Class

Where was she ? Who took her ? This wonderful documentary explains it ..

.. Perfect fun activity in February for your French Club. ..