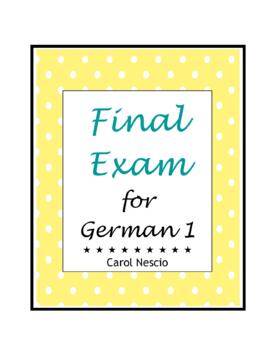 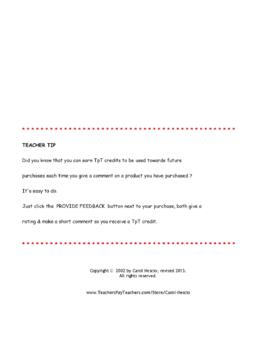 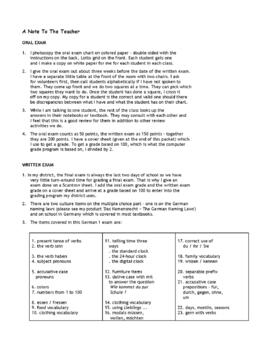 "It's not that I'm so smart, it's just that I stay with problems longer."

This final exam includes an oral part worth 50 points (25 questions) and a written part worth 150 points (150 multiple choice questions). Since our turn-around time is extremely short for final grades, the written questions are answered on a Scantron sheet.

The bingo card format for the oral part is also a great review exercise as students try to find the answers in their books and notes.

The written score combined with the oral score gives a final exam grade based on 100 which is easy to enter into the computer grading programs. Simple, detailed instructions are given on how to put the two grades together to get a grade based on 100.

The points covered in this level 1 exam are:

The 25 oral question part is stated in English and the student responds in German. This can also be used as a review exercise before your students take your own final or a mandatory department final exam. It can also be shortened to just five or ten questions if time is short.

The culture questions come from my documents ~

'The School * Pac For German'

which are separate from this document.

You can, however, substitute your own culture questions, too.

An answer key is provided for the written part of the exam.

Also included is a list of the room vocabulary that I present to be used as a homework (or review) assignment and a second homework assignment to reinforce those words.

Everything here is classroom-ready for you to use. (31 pages)