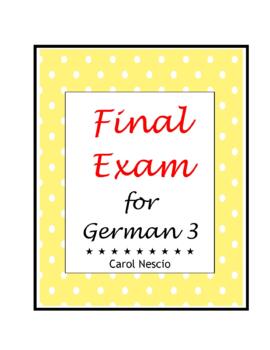 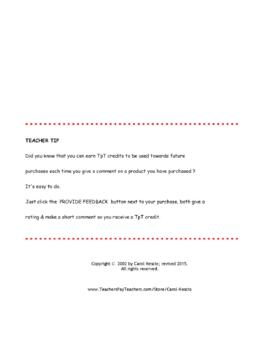 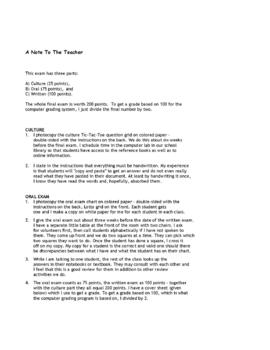 “I had someone correct my grammar once on a blind date and, within the first ten

minutes, the date was over. You just don't correct somebody's grammar."

This final exam is in three parts:

The oral part is done about three weeks before the day of the written final exam. The bingo card format for the oral part is also a great review exercise as students try to find the answers in their books and notes.

Since our turn-around time is extremely short for final grades, the written part of 100 multiple choice questions is answered on a Scantron sheet.

All three scores combined give a final exam grade based on 100 which is easy to enter into the computer grading programs. Simple, detailed instructions are given on how to put the three grades together to get a grade based on 100.

The points covered in this level 3 exam are:

4. adjectives in all cases after der

6. relative pronouns in the nominative case

7. relative pronouns in the dative case

8. relative pronouns in the accusative case

13. Culture - 'Toi toi toi And Other Customs In Germany'

18. the comparative of adjectives

19. the superlative of adjectives

20. the date in the nominative case

21. the date in the accusative case

22. various stores and what you can buy in them

The oral question part has 25 questions in English and the student responds in German. You can have students pick any five and answer them, too, if time is short. This can also be used as a review exercise before your students take your own final or a mandatory department final exam.

The culture questions on the written part of the final exam come from my * Toi Toi Toi * And Other Customs In Germany document which is separate from this exam document. You can, of course, substitute your own culture questions.

This is also a great review for your AP German students as well.

Everything is ready to use and can be easily changed if there is a vocabulary word or some point which your students have not yet had.

An answer key is provided for the written part. (31 pages)

If you're looking for other ready-to-use resources, you may be interested in some other items in my store:

* Berlin ~ Post-War Timeline .. You can't help but mention this iconic symbol of The Cold War when you're teaching German. Here's a brief overview ..