First Ladies of the United States-Webquest 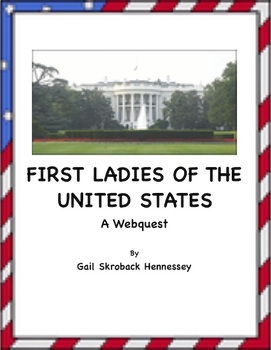 Gail Hennessey
1.3k Followers
Follow
Compatible with Digital Devices
The Teacher-Author has indicated that this resource can be used for device-based learning.
DescriptionReviews3Q&A

Did you know that First Lady Hillary Clinton was the first First Lady to become a senator of New York? She was also the first woman to get the nomination ,from a major party(Democratic),to run for President of the United States. Hillary won the 2016 popular vote by several million but lost in the Electoral College to Donald Trump. Did you know that Florence Harding was the first woman to be able to VOTE for her husband in a presidential election? Did you know that Eleanor Roosevelt was called the " First Lady of the World"? Learn about the contributions of some of our first ladies with this fun and informative webquest. Updated to include Dr. Jill Biden.

For grades 4 and up