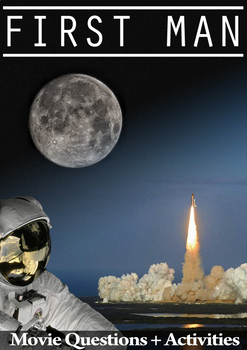 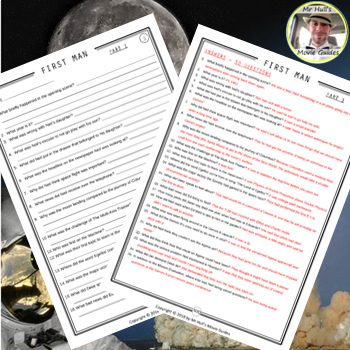 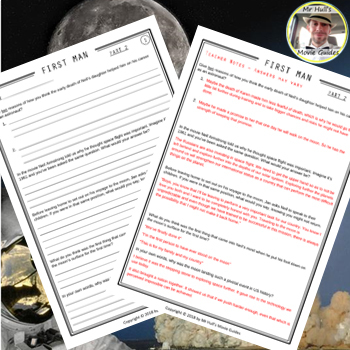 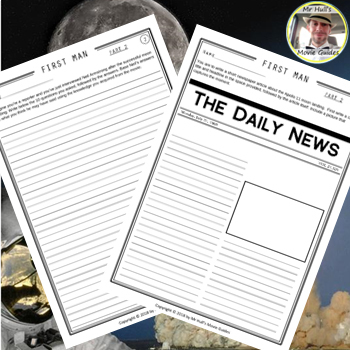 Mr Hull's Movie Guides
777 Followers
Follow
Compatible with Easel Activities
Create an interactive version of this PDF students can complete on any device. Easel is free to use! Learn more.
DescriptionReviews2Q&A

This 12 page movie guide with handouts accompanies the film "First Man (2018)". This guide will also work well as a sub plan for your substitute teacher.

PART 1 – Comprehension Questions. There are 2 sets for the different grade range, or an ESL class. Includes answer keys. Numbered question sets are shown at the bottom of each sheet.

• There are 5 additional critical thinking questions. Suggested answers included as answers may vary from the students.

• Students to imagine they have interviewed Neil Armstrong. They are to make up 10 questions they asked him, followed by writing answers they expect Neil to give. Students to use the knowledge gained through watching the movie.

• Students to write a newspaper article about the moon landing. First they need to write a catchy title and headline, followed by the article and a picture to go with it.

Based on the book First Man: The Life of Neil A. Armstrong by James R. Hansen, the movie is about the biopic life of the American astronaut Neil Armstrong and the legendary Apollo 11 space mission that led him to become the first man to walk on the Moon on July 20, 1969. It also explores Neil's life leading up to this historic US event.

If you don't already have the movie, you can purchase or rent it from Amazon.com

Please rate and leave a comment if you liked this product. See below how to get TpT credit to use of future purchases.

Thank you, and enjoy!

*All product covers are designed by myself using images and fonts either under Creative Commons CC0 or are copyright free. Names and titles are for ease of use and reference only. © Samuel Hull

How to get TpT credit to use on future purchases:

• All you need to do is go to your My Purchases page and beside each purchase you'll see a Provide Feedback button. Just click it and you will be taken to a page where you can give a quick rating and leave a short comment for the product. Each time you give feedback, TpT gives you feedback credits that can be used to lower the cost of your future purchases.

Worried about copyright issues using movies in the classroom? Don't be! Read all about it here:

Exceptions & Limitations: Classroom Use, Fair Use, and more

Learning from movies is motivating and enjoyable

- Sometimes students need a change in style, and movies are generally an integral

part of a student's life.

situations. This includes accents different to your own.

- This gives the student the ability to interpret the language in full visual context.

To see such visual supports as facial expressions and gestures simultaneously.

- Movies can also act as a springboard for follow-up tasks such as discussions,

Please take a look at my other movie guides by following the links below:

Catch Me If You Can

Cloudy with a Chance of Meatballs (2009)

Indiana Jones and the Last Crusade (1989)

Lord of the Flies - FREE

Rise of the Guardians (2016) - Christmas Edition

The Book of Life

The Boy in the Striped Pajamas

The Chronicles of Narnia: The Lion, the Witch and the Wardrobe (2005)

The Man Who Knew Infinity

Where The Wild Things Are