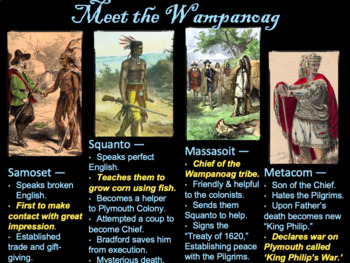 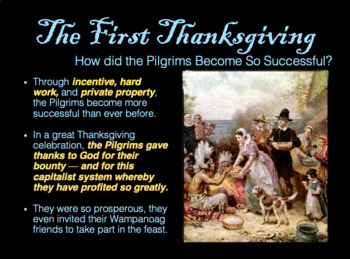 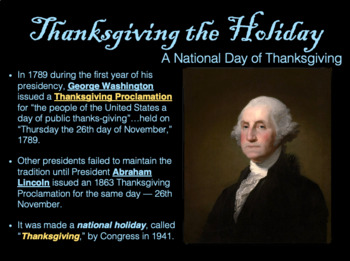 Ever wonder what you should teach on that weird day before Thanksgiving Break? This is it! Why not teach your students the wonderful history of the Pilgrims and the story of the First Thanksgiving? This presentation covers their religious persecution in England, their time in Leiden, the Mayflower journey, the Mayflower Compact, the founding of Plymouth Colony, the Winter of 1820-21, meeting Samoset and Squanto, Bradford's treaty with Massasoit, experimentation with the "Common Storehouse" (and its failure), the discovery of capitalism and private property, and the culmination of all their new prosperity with the First Thanksgiving Dinner! The true story of the First Thanksgiving is taken directly from primary sources of Governor Bradford's Of Plimoth Plantation and Edward Winslow's Mourt's Relation. This is an inspiring history of the Pilgrims' journey, their conviction in God, their growth as a colony, their positive relations with the Wampanoags, and the seeds they planted that would become our nation - including Washington's 1789 and Lincoln's 1863 "Thanksgiving Proclamations."

If you are interested in the Primary Sources: The First Thanksgiving Assignment, see here: Click Here for a Bargain!

Total Pages
30 pages
Answer Key
Does not apply
Teaching Duration
90 minutes
Report this Resource to TpT
Reported resources will be reviewed by our team. Report this resource to let us know if this resource violates TpT’s content guidelines.