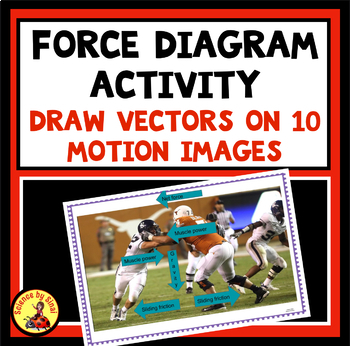 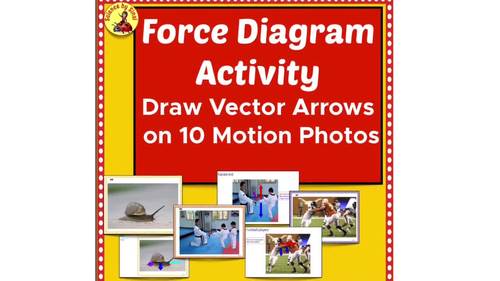 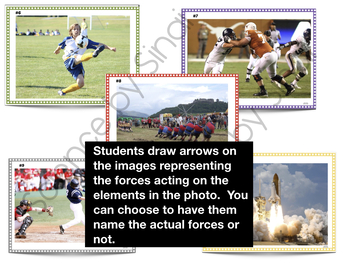 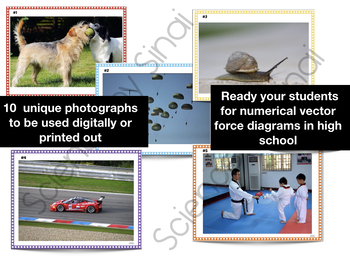 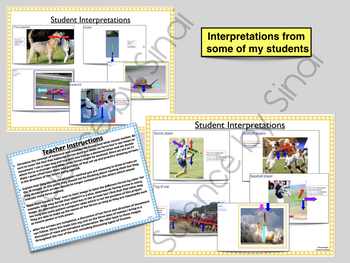 While discussing changing motion, balanced and unbalanced forces, direction factors, acceleration and net force, students will use these action photos to help them visualize these concepts. They will analyze these images and draw force diagram vector arrows on them to illustrate that motion is a result of the sum of forces on objects.

Before beginning this activity students should have a basic understanding of motion and the fact that a balanced force, although strong in opposite directions, won’t produce motion. A discussion of the forces that naturally act on objects in motion on earth such as friction and gravity should also be introduced. Alternative names for friction such as drag, air resistance or water resistance are helpful.

This resource can be used in a number of ways. Since my classroom is set up using digital notebooks on Google slides I simply send these to them via Google classroom and they use colored arrows on top of the images. An alternative is to print them and have students use markers or colored pencils. I have tried printing these in black-and-white successfully so the color markers stand out more. I have also had them make sticky note arrows on top of colored printed images.

Having use these for years I have found that the most successful way to approach this is to ask the students to look at the photograph and decide which direction is the object moving and what is causing that to happen? For example the snail is moving forward due to the muscle power of its foot. So the students will draw an arrow in the forward direction of the snails movement. At this early stage I don’t have them try to label the forces yet. As they are looking at the snail they need to think of what might be slowing down that forward movement such as the actual weight of the snail which would be a downward gravity arrow along with the friction of the object that the snail is sliding over. (This lends itself nicely to a discussion of friction with the fact that the snail secretes its own mucus to reduce that backward arrow)

Instead of making a strict teachers guide I have included my students’ (8th graders) interpretations of each of the force diagrams. I find it interesting when the students come up with their own names of the forces such as kick force, muscle force and so on. I try not to give too much guidance while they are figuring this out and, as I mentioned before, I don’t have them name the forces when we first begin. Only after they have drawn the arrows, and thought about the forces acting on each of the objects in the image, do we go back and use their vocabulary such as gravity, friction, air resistance, etc.

Since this activity leads into my unit on the three laws of motion, I bring in a discussion of mass and introduce acceleration. We refer back to these images throughout the rest of the unit, including discussing types of friction.

Log in to see state-specific standards (only available in the US).
NGSSHS-PS2-1
Analyze data to support the claim that Newton’s second law of motion describes the mathematical relationship among the net force on a macroscopic object, its mass, and its acceleration. Assessment is limited to one-dimensional motion and to macroscopic objects moving at non-relativistic speeds. Examples of data could include tables or graphs of position or velocity as a function of time for objects subject to a net unbalanced force, such as a falling object, an object sliding down a ramp, or a moving object being pulled by a constant force.
NGSSMS-PS2-2
Plan an investigation to provide evidence that the change in an object’s motion depends on the sum of the forces on the object and the mass of the object. Emphasis is on balanced (Newton’s First Law) and unbalanced forces in a system, qualitative comparisons of forces, mass and changes in motion (Newton’s Second Law), frame of reference, and specification of units. Assessment is limited to forces and changes in motion in one-dimension in an inertial reference frame, and to change in one variable at a time. Assessment does not include the use of trigonometry.
Total Pages
12 pages
Answer Key
Included
Teaching Duration
50 minutes
Report this Resource to TpT
Reported resources will be reviewed by our team. Report this resource to let us know if this resource violates TpT’s content guidelines.