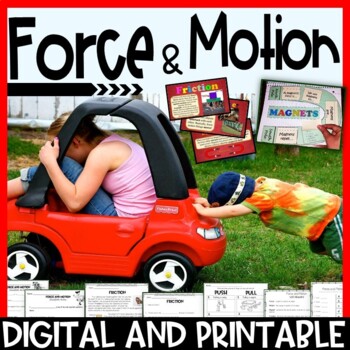 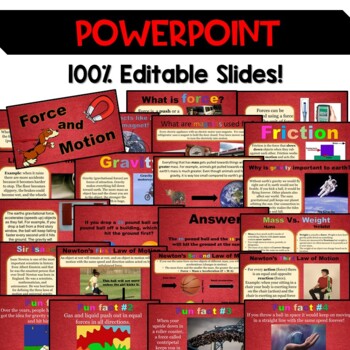 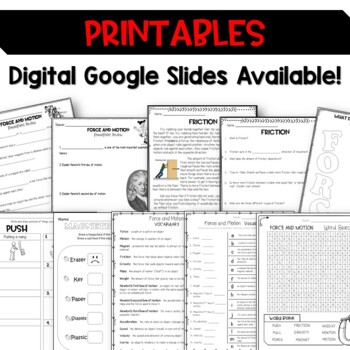 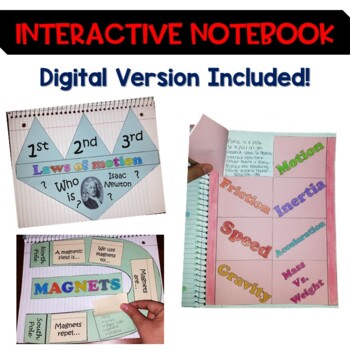 The 6 printables include review questions from the powerpoint, word search of force and motion vocabulary, acrostic poem about force (students write it), write and draw pictures of things you can push or pull in the provided space, and a page where the students draw a happy face if an object is magnetic or draws a sad face if it is non-magnetic. Answer keys are included.

The interactive notebook part of the unit includes a magnet with interactive steps to cut, glue, fill in, and color. Also, another about Isaac newton and his three laws of motion. After they follow the steps to cut, glue, and color, the students will write information under each flap. Lastly included is a vocabulary foldable. The topics of the vocabulary foldable include force, motion, friction, inertia, speed, acceleration, gravity, and mass vs. weight. Directions plus examples are included for each interactive notebook page.

Take a look at the preview to see exactly what you will be receiving after download.

If you like this unit, you will also Love:

SAVE BIG with Science Bundles:

Total Pages
21 slides and 13 pages
Answer Key
Included
Teaching Duration
N/A
Report this Resource to TpT
Reported resources will be reviewed by our team. Report this resource to let us know if this resource violates TpT’s content guidelines.