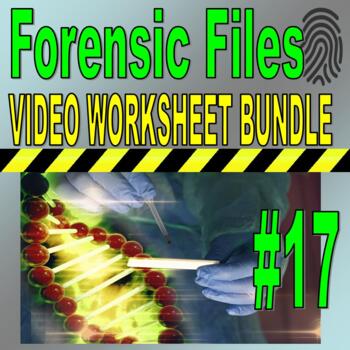 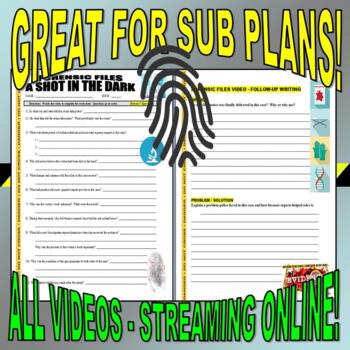 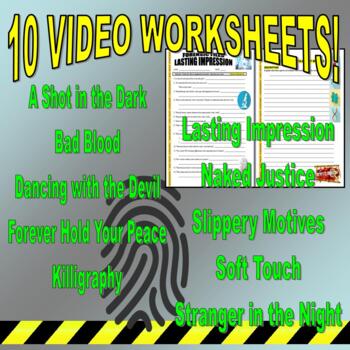 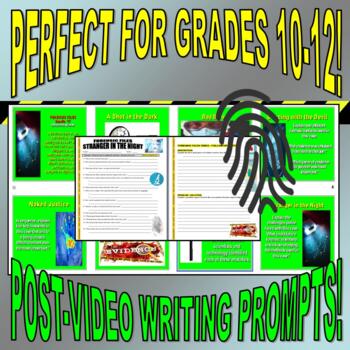 *Videos are necessary for completion of this worksheet.

As of May 2019, all episodes in this purchase are available free on You Tube which would make it ideal for computer lab or homework assignments (technology access provided).

Included are 10 worksheets for episodes of the television program Forensic Files. All of the episodes are available to view online for free (my preference is through YouTube). This makes this program great for in-class, computer lab, extra credit, or homework assignments since most students will have access to the programs through a variety of means.

The question sheets go in order through each episode with a focus on the science behind each case as well as the legal circumstances. I try to provide a variety of episodes to give students a wide range of ideas on how the career of a forensic scientist works. The episodes included in this bundle package (with their season and episode number) are:

Two sets of scientists, probe a woman's death during a trial and years later during a retrial. During both trials the issue of ballistics, blood spatter, and evidence are closely examined by numerous forensic experts with conflicting opinions.

In 1992, in a rural Canadian community, Dr. John Schneeberger is accused of sedating and sexually assaulting one of his female patients and his step daughter. DNA tests demonstrate that the doctor is innocent, but the female patient still insists that he sedated and raped her. On three occasions, blood was taken from the doctor's arm for DNA testing, and each time, the results exonerated Schneeberger. Seven years later, a private investigator takes lip balm from Schneeberger's car, has it DNA-tested and the results were a match to the perpetrator. So, how did Dr. Schneeberger trick earlier investigators?

Dancing with the Devil (Season 13, Episode 6)

In 1999, Patrick McRae was found dead in his Des Moines home and the crime scene was awash with blood. Analysis showed it had come from two people, one of whom was female. The male DNA was McRae's, which meant the killer was a woman. Leads dried up and the case went cold until a suspect arrested for drug possession offered police a deal, and told a bizarre tale of an exotic dancer named Andrea Morris who listened to the voices in her head. She was later charged in 2005 and sentenced to life in prison for the murder.

An examination of an unusual case in Texas involving the 1988 rape and murder of Nancy DePriest, while at work at Pizza Hut. After suspect Chris Ochoa confessed and implicated Richard Danzinger and they were imprisoned, the case was considered closed. Eight years later, Achim Marino confessed to the same crime. DNA evidence cleared Ochoa while proving that Marino was, in fact, the perpetrator.

This examination of the role an autopsy plays in a murder investigation focuses on the suspicious 1997 death of Georgia resident Virginia Ridley. Police charged her mentally unstable husband Alvin with murder, but forensic documents and a hidden medical condition led examiners to believe she died of natural causes, but would it be enough evidence to convince a jury...?

When the decomposed body of a teenage girl is discovered in Pennsylvania, police have no clues to her identity. But weeks earlier, stabbing victim Kathy Sagusti told investigators she thought she might have heard a murder taking place in her basement. Investigators eventually discover the identity of the girl as Richezza Williams, a 13-year-old runaway from Long Island, NY. Sagusti positively identifies her as the murder victim and that Corey Maeweather, Kwame Henry and Stanley Obas were the murderers. To prove it, investigators turn to bug larvae found on the body and a surprise piece of evidence: a tiny wad of chewing gum found near the victim's body.

In 1999, expectant mother Leann Fletcher is reported dead in her Michigan home of an accidental gunshot wound to the head. Was the wound self-inflicted, and if it was, why would this young mother with so much to live for kill herself? Forensic computer analysis, blood spatter analysis and a painstaking investigation led police to the truth that her lawyer husband Michael "Mick" Fletcher had motive to kill Leann, since he was having a sexual affair with judge Susan Chrzanowski.

In 1986, Edward Post left the Omni Hotel in St. Louis and went for a 40-minute jog. Before leaving, he said that he drew a bath for his wife Julie Thigpen-Post. Ed returned and called the front desk, stating that his wife had fallen in the bathtub and was not breathing and she was dead when emergency response arrived. Investigators considered accidental death, until they discovered that Ed had a $700,000 life insurance policy on Julie. A second autopsy found 36 areas of bruising, not noted during the original autopsy. The death was ruled a homicide and Ed Post was charged with the first-degree murder of his wife. The trial ended in 1989, and Ed was found guilty of first-degree murder. After serving six and a half years, Ed admitted to the drowning of his wife.

In 1992, 22-year-old Dawn Bruce was brutally murdered in her Virginia apartment. The killer left very little evidence, but investigators did notice a blood smear on a pillow case that appeared to have been made by one of the killer's fingers. New technology enabled investigators to identify a fingerprint from the cloth surface of the pillow case. This gave police the means to apprehend Robert Douglas Knight, who killed Dawn Bruce in a senseless act of revenge.

In 1991, Dorothy Donovan was murdered in her Dover, Delaware home and police are skeptical when her son Charles Holden stated that she was murdered by a hitchhiker he had picked up. Their suspicions were heightened when he refused to take a polygraph test and they turned to forensic science. Would the blood and fingerprint evidence at the crime scene support Charles' story or prove his guilt? The case went cold for many years until the DNA of ex-con Gilbert Cannon linked him to the crime.

Questions on the assignments go in order and will help students remain focused on key science topics. Two extended response questions are on the back of the worksheet (description and compare/contrast) which are perfect for reflection and discussion at the conclusion of the video. There are also additional writing prompts for every episode included with a power point for easy classroom display.

DOC & PDF Versions: The worksheet is given as a MS-Word document (DOC) which will allow easy modifying to fit your class. A PDF version is also provided for ease of use/printing. Answer key is not included.

*Besides You Tube, the video needed for viewing can be purchased through a variety of sellers both as physical media or through streaming viewing (including Amazon, Netflix, and Hulu - availability does change).

Thank you for your purchase and for taking the time to leave me positive feedback.

LOOKING FOR MORE FORENSIC FILES? CONSIDER A BUNDLE PURCHASE AND SAVE!

Total Pages
20 pages
Answer Key
Not Included
Teaching Duration
N/A
Report this Resource to TpT
Reported resources will be reviewed by our team. Report this resource to let us know if this resource violates TpT’s content guidelines.