Four Dead in Ohio: The Kent State Shootings (A Day in History) 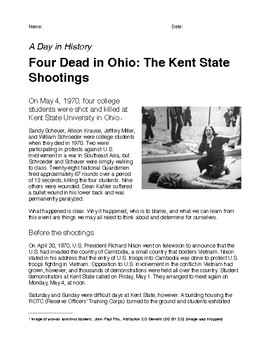 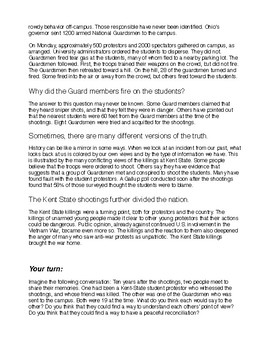 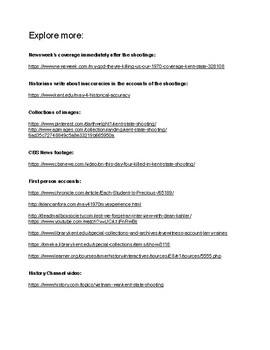 Four students were fatally shot by troops from the National Guard on May 4, 1970. The shootings happened as the United States was winding down its participation in the civil war in the small country of Vietnam. The incident divided the country at the time, and is still a subject of conflicting interpretations. This activity is a brief reading that summarizes the events, the areas of certainty, and the areas of differing interpretations. Readers are asked to imagine a conversation, years later, between a former student and a former Guardsman.

Log in to see state-specific standards (only available in the US).
CCSSWHST.9-10.1b
Develop claim(s) and counterclaims fairly, supplying data and evidence for each while pointing out the strengths and limitations of both claim(s) and counterclaims in a discipline-appropriate form and in a manner that anticipates the audience’s knowledge level and concerns.
CCSSWHST.9-10.1a
Introduce precise claim(s), distinguish the claim(s) from alternate or opposing claims, and create an organization that establishes clear relationships among the claim(s), counterclaims, reasons, and evidence.
Total Pages
N/A
Answer Key
N/A
Teaching Duration
N/A
Report this Resource to TpT
Reported resources will be reviewed by our team. Report this resource to let us know if this resource violates TpT’s content guidelines.