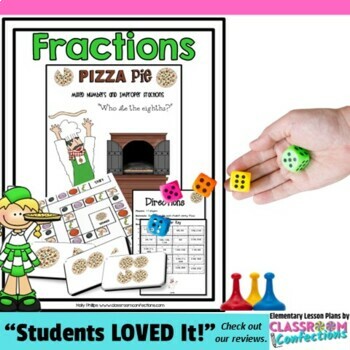 This is a fractions game with a pizza theme. It covers improper and mixed numbers. Students will draw a card and then look at the pizza pieces on the card. They will name the pizza in two ways: improper fraction and mixed number. Based on whether they get it right or not will determine if they move around the board. Directions are included.

The game has the subtitle, "Who ate the eights?"......The fraction pizzas are in eights, but can be renamed in a variety of ways, for example, 6/8 can be named as 3/4.

Included are: cover sheet if you choose to use it as a file folder center, adorable pizza themed game board that can be used with other game cards, 20 pizza themed fraction cards, directions, and answer key.

This works perfectly for a math center.

For more creative lesson ideas, please click on 'elementary lesson plans' by my picture above.