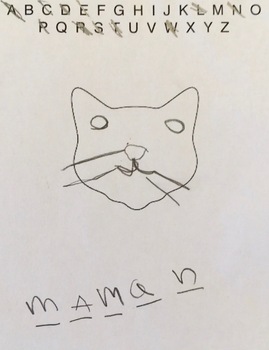 I developed "Dessiner le chat" after a young homeschool student told me that she didn't like "drawing dead people" in the traditional Hangman/Pendu game. In this version, students draw facial features on a kitty for each incorrect letter.

Directions: Play like Le pendu (hangman) with words or phrases. Draw lines (one for each letter) to indicate the number of letters (and divisions between words, if appropriate). As players guess letters, fill in the correct ones in the correct places. If a guessed letter does not appear in the mystery word, mark through it on the alphabet at the top of the game. Instead of drawing body parts on a corpse for every incorrect letter, though, draw facial features on a cat!