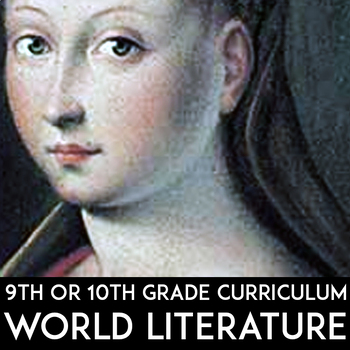 Want to be done planning your ELA curriculum for the rest of your career?

It’s so challenging to figure out yearly plans. Deciding on the best time to schedule assessments, slogging through multiple texts, trying to come up with activities and questions so that your classes aren’t bored all while you’re dealing with grading, faculty meetings, study halls, parent communication, and keeping up with the latest requirements and standards. It’s impossible for a teacher to do it all.

And if you don’t plan out the year sufficiently, you’ll be left teaching meaningless, irrelevant texts that don’t engage students, scheduling assessments for the last minute when you are already totally overwhelmed, and completely out of energy. Even worse, your boring plans will create classroom management problems and teach your classes to hate literature.

Why reinvent the wheel when someone else has already gone through all that for you? Have your entire 180-day schedule planned out so you can save your time and energy for the work that really counts: connecting with your students and giving them the challenges and support they need to grow as learners.

The extensive plans included in this resource are enough for 180 days of rigorous common-core aligned reading, analyzing, discussing, and writing as well as plenty of fun activities to keep students on their toes and trying new things. These resources are based on the best practices that I have learned over my sixteen years of teaching and they are all you need for a complete ELA curriculum.

With an over-arching theme of exploring new worlds, the units in this year-long plan will challenge your classes to learn about growth mindset and failure, family and coming of age, bullying and hate crimes, genocide and colonialism, and how we can work together to make our world a better place. They’ll improve as writers and critical thinkers, and you’ll all learn so much about each other.

These lessons also make great choices for online teaching because the clear instructions and structured questions are written for students to tackle independently. Additionally, the concrete text-based questions and unique sources discourage cheating and encourage students to answer for themselves.

The variety of materials, real-life connections, and innovative approaches to the information will keep students engaged and excited about learning. Learning from home gives students a great opportunity for exploring the TED Talks, articles, and real-life sources examined in the unit.

Want to see what you’ll get before you buy? Click on the preview for the bonus item to see the entire 180 day schedule.

When you teach with the innovative units in this giant bundle, you will:

There are no lectures or power points here—students will do the work themselves, with guidance from you. Rather than telling them what the texts mean, you will be empowering them with the confidence and skills to tackle literature on their own.

Texts and sources included in this curriculum:

The Tempest by William Shakespeare

“The Ones Who Walk Away from Omelas” by Ursula Le Guin

“A Certain Lady” by Dorothy Parker

“Judith and Holofernes” a painting by Artemisia Gentileschi

“Of Revenge” an essay by Francis Bacon

“Sonnet 130” a poem by William Shakespeare

“Sonnet 18” a poem by William Shakespeare

“Sonnet 73” a poem by William Shakespeare

Excerpt from A Tempest by Aime Cesaire

Excerpt from "Sycorax" by Suniti Namjoshi

“Rules to Live By” a radio story excerpted from This American Life’s show on Harper High School in Chicago, 2016

“Judith and Holofernes” a painting by Artemisia Gentileschi, completed between 1614–20

“Bored, Broke and Armed: Clues to Chicago’s Gang Violence” an article by John Eligon, published in The New York Times, 2016

“How We Cut Youth Violence in Boston by 79 Percent” a TED Talk by Jeffrey Brown, 2015

“There's Another Solution To Gang Violence” an opinion piece by Don Williamson, published in The Seattle Times, 1990

"We Are Reclaiming Chicago One Corner at a Time” an opinion piece by Tamar Manasseh, published in The New York Times, 2017

“Editorial: A Chicago alderman finally speaks truth to gang violence” an opinion piece by Editorial Board, published in The Chicago Tribune, 2017

“The Wrong Way to Fight Gangs” an opinion piece by Lauren Markham published in The New York Times, 2017

“Elena” a poem by Pat Mora

“The Writer” a poem by Richard Wilbur

“Sonnet 130” a poem by William Shakespeare

“Sonnet 18” a poem by William Shakespeare

“Sonnet 73” a poem by William Shakespeare

"The Victims” a poem by Sharon Olds

“The Birthday of the World” a poem by Marge Piercy

“The Shawl” a short story by Cynthia Ozick

“The Talent Myth” an essay by Malcolm Gladwell

“The Lottery” by Shirley Jackson

“The Ones Who Walk Away from Omelas” a short story by Ursula K. Le Guin

Total Pages
1,127 pages
Answer Key
Included
Teaching Duration
1 Year
Report this Resource to TpT
Reported resources will be reviewed by our team. Report this resource to let us know if this resource violates TpT’s content guidelines.

Log in
to see state-specific standards (only available in the US).
CCSSSL.9-10.4
Present information, findings, and supporting evidence clearly, concisely, and logically such that listeners can follow the line of reasoning and the organization, development, substance, and style are appropriate to purpose, audience, and task.
CCSSSL.9-10.2
Integrate multiple sources of information presented in diverse media or formats (e.g., visually, quantitatively, orally) evaluating the credibility and accuracy of each source.
CCSSSL.9-10.1d
Respond thoughtfully to diverse perspectives, summarize points of agreement and disagreement, and, when warranted, qualify or justify their own views and understanding and make new connections in light of the evidence and reasoning presented.
CCSSSL.9-10.1a
Come to discussions prepared, having read and researched material under study; explicitly draw on that preparation by referring to evidence from texts and other research on the topic or issue to stimulate a thoughtful, well-reasoned exchange of ideas.
CCSSSL.9-10.1
Initiate and participate effectively in a range of collaborative discussions (one-on-one, in groups, and teacher-led) with diverse partners on grades 9–10 topics, texts, and issues, building on others’ ideas and expressing their own clearly and persuasively.