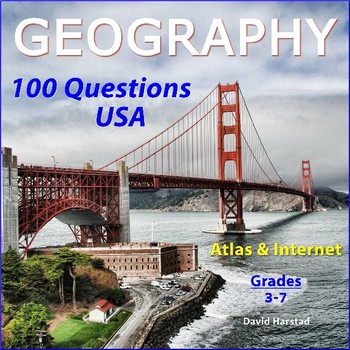 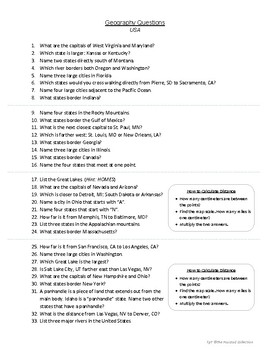 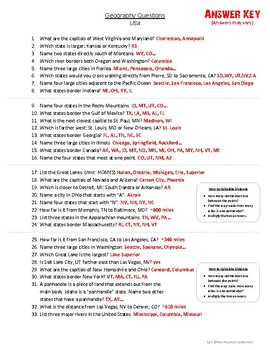 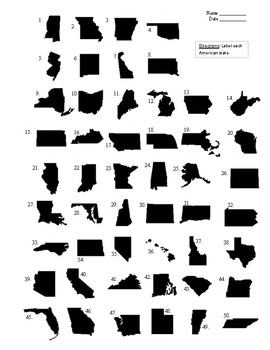 This listing is part of the larger Geography Bundle: Maps, Questions, Labeling.

1. What are the capitals of West Virginia and Maryland?

2. Which state is larger: Kansas or Kentucky?

4. Which river borders both Oregon and Washington?

6. Which states would you cross walking directly from Pierre, SD to Sacramento, CA?

10. What states border the Gulf of Mexico?

16. Name the four states that meet at one point.

18. What are the capitals of Nevada and Arizona?

19. Which is closer to Detroit, MI: South Dakota or Arkansas?

25. How far is it from San Francisco, CA to Los Angeles, CA?

27. Which Great Lake is the largest?

29. What are the capitals of New Hampshire and Ohio?

31. A panhandle is a piece of land that extends out from the main body. Idaho is a “panhandle” state. Name two other states that have a panhandle.

32. What is the distance from Las Vegas, NV to Denver, CO?

35. Which state is smaller: Connecticut or Delaware?

37. What are the state capitals of New Mexico and Kansas?

38. Is the capital of Hawaii on its largest island?

39. What is interesting about Alaska’s capital? Why do you think it is in this location?

40. How far is it from Albany, NY to Philadelphia, PA?

42. What are the capitals of North Carolina and Wyoming?

45. Which state is larger: Colorado or Pennsylvania?

46. What river borders Oklahoma and Texas?

47. If you traveled directly from Pierre, SD to Miami, FL, what states would you cross?

48. What states border the Great Lakes?

49. Which city is farther north: Tallahassee, FL or Mobile, AL?

52. The Mississippi River starts in Minnesota and empties into the Gulf of Mexico. List the states that border the river.

62. Find a state capital whose name has more letters than Idaho’s capital.

64. Is Illinois east or west of Kansas?

66. What states lie between Texas and North Dakota?

67. What states border Mississippi and Vermont?

69. Which state is closer to Iowa: Delaware or New Mexico?

71. What are the capitals of Louisiana and Michigan?

72. If a plane flew directly from Santa Fe, NM to Concord, NH, which states would it cross?

73. How many states border Kentucky?

75. Which is closer to Maryland: Texas or North Dakota?

77. Is Connecticut closer to Montana or Colorado?

78. What states are directly between Rhode Island and Delaware?

81. What states border the Colorado River?

84. What states are crossed flying directly from Lansing, MI to Baltimore, MD?

87. Name three port cities on the Gulf of Mexico.

88. Is Lincoln, NE closer to the Atlantic or Pacific Ocean?

91. How far is it from Portland, OR to Birmingham, AL?

93. What are the capitals of Oregon and Connecticut?

95. What states border both Kansas and Arkansas?

96. Name the mountain range in both Oregon and Washington.

97. How far is it across Washington state?

Be the entertainment on cross country road trips!

Return to The Harstad Collection.